Introduction
Thomas Malthus. The idea that populations increase until they hit the limits of their resources and then suffer either war, starvation, or pestilence until the population comes back into line with the resources.  Jacques Neirynck (1). The idea that technology has the effect of pushing that limit up.

The Black Death killed off 75% of the population of Europe in a very short space of time. Some attribute Europe's success on the world stage to the fact that post-Black Death, each European had four times the resources as before, and indeed, of any other Earthling.

The US colonization of North America and the slaughter by genocide of the Native American population had effectively the same result, i.e., the Anglo-German colonists had the resources of an entire continent which previously supported many times their own number. Could this have had the effect of catapulting the United States of America into the greatest economic and military powerhouse in human history (2)?

Large numbers of people being killed off in mass epidemics (4) or in warfare or genocide leaves the spoils of resources to the survivors, who, being fewer in number, potentially much fewer in number, are able to live better, create more infrastructure and technology, and thereby catapult their culture forward (5).

If we apply the twin principles of populations limited by resources, and that technology can expand those limits, to the idea that different cultures have different levels of technology (3), we can see how colonization might produce a similar salutary effect for the invading culture, without providing any such benefit for the colonized peoples, and how this disparity might wear off over time.

Land Value Effect of Technology under Colonization
When a country such as the British Empire colonizes another country, such as India, we tend to assume that the former country is better organized and has better technology. If we can assume that, then the potential levels of resource exploitation of the same country, the same land, by the invader is greater than that which the native population is able to extract.

Unlike with genocide, where the preëxisting population is slaughtered and its land taken (7,8), the colonizer does not kill off wholesale the native populations, but lives alongside them in one form or another (9). The point I would make is that the total resource usefulness of the same territory from the perspective of the natives and of the colonizer might look like this: 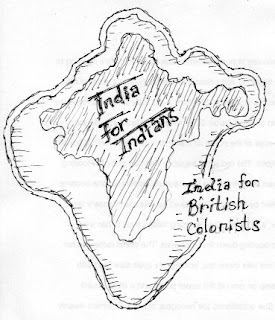 The colonizer is no longer offering marginal benefit in terms of technology or organization, i.e., natives adhering to the colonizer's rule are no longer better fed, protected, or what-have-you than those who are not (if these even still exist (13)). The only thing between the colonized country and home rule is dispensing with the de juris colonial rule, and this comes down to the colonizer's military capability and willingness to keep the colony under its sway (14).

Summary
Ultimately, once the native population reaches the same or similar level of technological efficiency in resource exploitation to the colonizer, the total technologically available resources vis-à-vis the native population approaches that of what is available to the colonizer. There is no longer any real margin for the colonizer to live off of or to steal and export back to the home country. The colonizer is caught between the Scylla of trying to keep at least some of the technology for more efficient resource exploitation out of the hands of natives and the Charybdis of possible supplantation by another still more efficient colonial power or ejection by a native population that becomes able to maintain their newfound levels of production and consumption on its own and finds the political (and military) will to assert home rule.

(2) could be termed the Le Defi Américaine, vis-à-vis Europe.

(4) which may return, given the recent craze of denying vaccines.

(5) one wonders how well this could be applied to post-WWII Japan. It has been written that with all infrastructure destroyed, many cities razed to the ground (some by atomic bombings), millions dead, total occupation (6), "few people in history have ever been so thoroughly beaten." Could Japan's bouncing back to become the world's #2 economic superpower by just two or three decades later be thanks to the "slack" afforded by America's "gift" of devastation?

(6) for the first time in Japanese history, by the way -- the Americans succeeded where even the Khans of China failed.

(7) as with the natives of North America and Australia and elsewhere.

(8) in genocide, the invader need only be more efficient at killing, as Diamond points out in Guns, Germs, and Steel, and not necessarily more efficient at resource exploitation. In fact, it's often ironically pointed out that in many cases natives who were genocided were better at living off of the environment, plants, terrain, animals, etc., that they were driven from than their invaders.

(9) often as slave-driver and slave, but this is tangential to the point I'm making.

(10) The same could be said of purely military technology. e.g., the Native Americans acquired more and more weapons and the ability to use them from the Anglo-German invaders, making them a more serious threat as time went on, eventuating in the need for actual concerted military action (post-US War of Succession, a.k.a., "The Civil War", especially), and actual military fortifications throughout what is now the Western United States. The same could not be said of the British genocide of the aboriginal Australians (particularly Tasmania), who were basically slaughtered like animals until the British effectively just decided to knock it off.

(11) In order to exploit the natives for their productivity as individuals and also for the sheer manpower needed to exploit and steal the resources of their country, the local population must be trained in the techniques and technologies of the colonizer. This is a double-edged sword, i.e., the more the natives are allowed to learn, even if they are actively prevented from independent use of new technology (12), they are ultimately reaching a point where all of the natives are enjoying the riches of the productive output of other natives using the colonizer's technology.

(12) keeping too much of a thumb on the natives, e.g., preventing them from starting their own businesses, is self-defeating in a way, since it's more efficient to allow unrestricted capitalism (14).

(13) indeed, the ability of the colonizer to organize and exploit the natives more efficiently than the natives themselves are capable is the very thing that drives colonization forward. Otherwise, it's mere military occupation.

(14) another outside factor is that if another colonizer, more efficent than the first, enters the scene, and is willing to drive the original colonizer off militarily (if necessary), then that second colonizer may take over, and once again expand the disparity in the resource exploitation efficiency between itself and the native populations, i.e., the available resource diagram expands back something like its original form.