Cutting the Cheese in Writing


This is as of July 17, but still pretty much current.

One thing about the to-be-named heroine's journey is that one of her companions along the way may be a young female (woman) from a species of people with no birth canal, maybe they're hermaphroditic as well, so they die when they give birth (advances in surgery later may make surviving birth possible), but I may just put this into my comic strip (Poets of Porcadis).

Posted by jayushkin at 7:04 AM No comments: 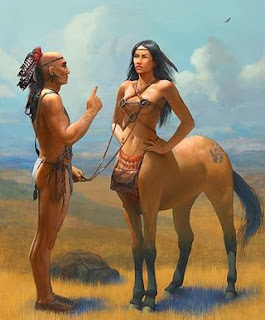 Coincidentally, I drew some of my own....
(from my Full-Service Native American Bank story arc) 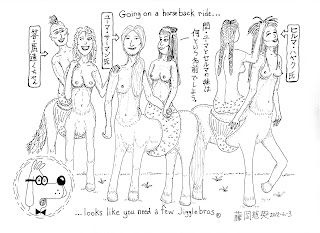 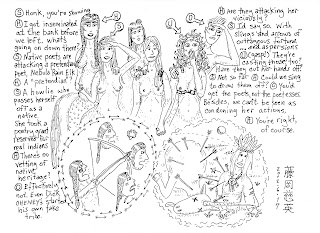 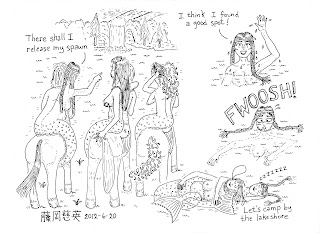 Posted by jayushkin at 4:20 AM No comments:

模倣子 Why Wheelchairs before Women...?

I'm probably missing something here, so let me know if so, but I see governments and corporations spending literally millions on wheelchair ramps and special elevators to give access to disabled folks, which is a good thing, but 50% of the population have this "different-ability" where babies tend to pop out of them and they are then able/oblidged to feed said babies directly from their bodies for an appreciable length of time. These folks are 100% able to work productively (which is more than can be said of many folk needing wheelchair ramps) and yet I see next to no accommodation for or, probably more importantly, acknowledgement of, the whole baby/feeding factor. It strikes me as a rather gross incongruity, somehow, given that I have literally never seen a person in a wheelchair come to my office during my decades of work.

It is sadly common for breastfeeding women to face serious issues in the workplace. They are often told they only have the standard 15 minute break and lunch break and no more even though they might have to pump more often. They aren't allowed to bring a young baby to work so they can feed it directly. We are also the only industrialized nation that doesn't mandate paid leave for mothers (or fathers). Other countries recognize the value of parenthood early in the life of a child. Thankfully, the university is creating lactation stations all over campus (the women's center is one) where women can go and pump if they need to or breast feed a baby. My office at the women's center is also very open about babies and staff with young children can and have brought their babies to work so they could provide for them during work hours. I do not know how other departments accommodate parents. But the government doesn't seem to be in the works to make any accommodation required for breastfeeding mothers. Unlike folks who use wheelchairs, breastfeeding isn't considered a disability so doesn't fall within those laws.

I ask myself if there is an "image" of what nursing in the workplace should look like. How much would it help to make hassling a nursing woman a work and/or civil offense? I wore my son around most of the time we were not in the apartment -- do women themselves reckon they could wear their babes around with them while they work (like Sakagewea did -- we just saw a show on her) or that that would be "too hard"? Men can lactate, too, by the way -- promoting that might pave the way as well. I'm not sure about these massive leave times some places have -- it sounds great, but who pays for it? plus it cuts years out of one's career experience and besides, sitting around an apartment alone with a kid might be dead boring for a lot of folk -- it might be nice to have other choices (isn't that what it's all about in the end?).

Women certainly don't think it is too hard! Most would love to be able to bring kids with them. However our society views women as slackers if they take too much time fir kids. Meanwhile men who do tge same thing are praised as special nagical loving parents. It is a long standing double standard in our society

Yeah, I would say that it's less "serious issues" and "total lack of any reasonable support".

Women or men being viewed as slackers or virtuous or whatever -- I see it as probably symptomatic of some larger system of oppression.

There are women, have been women, wherever I work, and they all tend to leave (except for the occasional odd-ball) when they have kids. One idea is that women are entitled by their ability to have children to just go home and take it easy and enjoy female privilege while men have to keep on working no matter what. Another is that "society" wants women out of the workplace, and kids are an "excuse" to leverage them. There are many other ways to look at it, too -- it's a complex web of memes.

yeah, the oppression is facilitated and nurtured by the patriarchy. Sadly though men and women don't experience that oppression the same. While men are brought up to believe that a real 'man' is tough and shows no emotion and doesn't want to be a daddy they are still given much more access to financial stability, jobs, education, less constricting body image expectations, assumed to be smarter than women, assumed to be more 'logical' than women, etc. The patriarchy sucks for everyone because it keeps people from being who they really are. But it also maintains a hierarchy that puts white men at the top and  [sic]

No, women don't sit back and relax if they are stay at home moms. That notion is truly fucked up.

Some women do sit back, others don't. Just like people who work hard at a job and others don't. Many women (and men) abuse and neglect their children. To say that all women are "good parents" and "work hard for the good of their children" is huge overgeneralization. To imply that all women are "little goodies" (des p'tites bonnes) leaves yourself open to a lot of backlash that doesn't do the cause of feminism any good.

I'm talking about women having the choice to work and that being supported by society. I have a Y chromosome and I support it, absolutely. I risk my career and everything all the time in support of it, so overgeneralizations about men and the patriarchy are, well, to put it nicely, overgeneralizations. There may be truth there, but I would argue, not many solutions.

"Men are brought up to...tough and show no emotion" really means that young boys are beaten and ridiculed from birth to only be allowed the "football emotions": rage, exultation, and lust. I've recently come to understand how FRIGHTENING it is (for women, but also for other men) to have to deal with individuals who have been conditioned that way. But, that's not really what I was talking about, and until mommies (and daddies) stop cutting off the ends of their little sons' penises and proceeding to systematically torture them in the "socially-acceptable" fashion, we're going to have to keep dealing with it.

I think that "oppression is nurtured by the patriarchy" is cart-before-the-horse. What we perceive as "the patriarchy" (or more accurately "kyriarchy") is a symptom, a tip-of-the-iceberg of what is really going on, and we can only address it at that level. Bogus notions such as "men are more logical", "men are tougher", "women should be at home" are somehow in place because they support some kind of stable structure. If you try to change them by simply destroying/uprooting them without replacing them with sometime at least as stable (preferably more), you will encounter violent resistance, and NOT from individuals, per se, but from the system ITSELF.

That's why I'm asking if we can come up with stable social systems in which women have their babies, come right back to work, can take care of their babies right there in the workplace and be supported (or at least not hassled and dragged down) just as humans have done for millennia? If we can't do that, then we're nowhere. If we can, then women have the opportunity to engage with society and their fellows fully, without undue impediments, childbirth is not an illness, it should not be a handicap, and men will have the opportunity to work side-by-side with women, which is good for men.

One problem with statements like "are given more opportunities", "have less expectations", etc., in terms of roadmaps for a new philosophy of liberation is that they are agentless, i.e., it is impossible to identify who is....doing it. So there's nobody to...stop doing it. Demonizing all men for a social pattern seems really counter-productive, in addition to being horribly unfair and, in many cases, cruel.

I guess it's out of the bag that they're going to start a daycare program where I work.  There may have been only one man who spoke up to the senior execs and said that it was unacceptable that so many female colleagues were leaving because they had babies and it was too hard to keep working, and that they were serious engineers and project managers and that we simply couldn't afford to keep losing them.  That was me.  I consider women to be members of the same species as me, so their fight is my fight.  That's what I have always believed, and I take risks for my beliefs.  And I have a Y chromosome.  Does that make me automatically part of the problem?  Or do my beliefs and my willingness to act and my special position as man make me helpful towards finding a solution?  From what I always keep hearing, it ain't clear which.

Then again, I can't be in the position of telling women what to do with their babies at work -- I don't know what necessarily will work and what won't. There has to be agreement by all parties: all workers, the mothers, the employers, government, and so on. If you have trouble with the woman in the next cube nursing her baby: 1) get over it, 2) move to another cube, 3) find another job, for example -- that's a solution to one of the many possible issues. Manufacturing facilities have moving machines and hazardous chemicals, maybe that's not suitable for baby-wearing, but maybe there are solutions there, too.

Yeah, so I guess I'd say that blaming "The Patriarchy" is about as useful as blaming "the rain gods" or "evil spirits" as far as finding a solution goes.  And blaming "all men"...well, it's probably easiest to just call it "stupid" since it's factually wrong, just as unfair as anything else, just as sexist, and it entrenches the "bad/inured men" and alienates/frustrates sympathetic men who are trying to help.  Not the way to go if you're really trying to find a solution with any credible basis in an appeal to human rights (as opposed to trying to consolidate political power based on some notion of special entitlement).

By the way, I'm more than 50 pages into writing a comic strip that illustrates some of these ideas from the standpoint of memetic analysis and memetic deconstruction of sexism and systems of oppression (mainly of women, but also circumcision, etc.). You'd probably either really love it or really hate it (it has lots of Star Wars, Star Trek, and Matrix references, by the way).
Posted by jayushkin at 7:43 PM No comments: