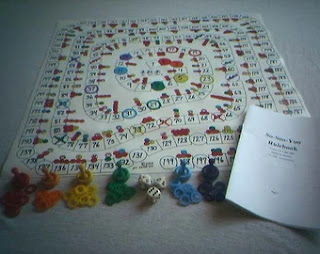 I need to add more graphics

Posted by jayushkin at 4:18 AM No comments:

A backronym is an acronym formed from an already existing word. Backronyms may be invented with either serious or humorous intent, or they may be a type of false etymology or folk etymology. The word is a blend of back and acronym.

An acronym is a word derived from the initial letters of the words of a phrase, such as the word radar, constructed from "radio detection and ranging". By contrast, a backronym is "an acronym deliberately formed from a phrase whose initial letters spell out a particular word or words, either to create a memorable name or as a fanciful explanation of a word's origin."

For example, the United States Department of Justice's Amber Alert program was named after Amber Hagerman, a nine-year-old abducted and murdered in 1996; but officials later publicized the backronym "America's Missing: Broadcast Emergency Response"

Actually, i think I’ve heard of this, but thanks for putting it back on the playlist.
I feel like I should be able to rattle off a few good examples of my own, but nothing leaps to mind.
I guess words like SCUBA 🤿 (Self-Contained Underwater Breathing Aparatus) are just cases like RADAR where somebody wanted something pronounceable and memorable, but wasn’t shoehorning a meaning into an existing word/acronym.
Is there a name for that? Coming up with a pronounceable acronym? Like SUSPECNA?
And from the Wikipedia article I ran into Backronym﻿

The term quango or QUANGO (less often QuANGOor QANGO) is a description of an organisation to which a government has devolved power, but which is still partly controlled and/or financed by government bodies. The term was originally a shortening of "Quasi-NGO", where NGO is the acronym for a non-government organization.

https://en.wikipedia.org/wiki/Quango?wprov=sfti1
That’s really interesting.
I can almost think of one or two more. It’s like a meta-acronym, where one bit is an acronym, which makes up often one letter of a new acronym, but that’s almost something else again.
I’ll try to recall some good examples. Does the fact that I can’t mean my brain 🧠 is going soft? I think I could’ve rattled things off once upon a time.
I think the computer industry has a few.
Not a particularly good example, but a guy name Bourne wrote the first shell 🐚 (I won’t attempt to explain what that is except to say the it’s a generic scripting and user interface which you have to run in order to log in or do anything), and it was called “sh” or “/bin/sh”. There was another shell written called “C shell” (“C” being a language) and it was named “csh”. The point being that if it had been a Pascal language interface, it would’ve been named “pascalsh” or “passh”.
Anyway, the punchline. An enhancement (now used everywhere) was made to Bourne shell, which was named “bash” or “Bourne-again shell.”
GNU is a Unix open source movement. It stands for “Gnu’s Not Unix”, an infinitely recursive acronym rather like “GoD” Is “God of Djinn 🧞‍♂️ “.
Anyway, one common utility, replacing the old C compiler is the GNU version, the GNU C compiler, or “gcc”.
“troff” is an early typesetting utility whosename came from the expression "to run off a copy". No attendant 🐖 pig-related utilities that I know off.
The big typesetting utility TeX, was apparently taken from the Greek 🇬🇷 “TeX” or “tech” and one enhancement by Lamport was called “LaTeX” (though apparently Lamport won’t admit to the etymology) and there’s also a version called “ConTeXt” but I don’t know what that one’s for.
Oh, this one is fun. The lexical analyzer utility is “lex” and the compiler building tool is “yacc” or “Yet Another Compiler Compiler” so of course the GNU version of “yacc” is named “bison”.
I think one can imagine that the internal library calls are rife with this sort of thing, but I did my system-level programming during the System V / Berkeley era, which, while not a pun desert 🌵 doubtless nothing compared to the present.
I did write a security system (the “priest” program) into which I crammed as many catholic jokes and references as I could find, but nothing that FDR would consign to backronymy, before Congress or elsewhere.
And of course we have “gmail” for “Google e-mail”
I know there are some much better ones (to do with government or well-known inventions), so I shall slog on a-pondering!
Thanks!
Posted by jayushkin at 2:25 AM No comments:

t.co/NcRfdjWxqe from David Mack’s Tweet
Rock made a joke about Jada Smith’s bald head. There’s footage of the joke if you look it up. Jada has an autoimmune illness that caused her hair loss. So the joke about Jada going for GI Jane part 2 was in bad taste. Not enough people get smacked if you ask me.
==========
I saw it. Interesting even on many levels.
Yes, the whole joke revolved around somebody being bald from an illness, which would definitely not land with cancer, so you can see it landing for anything else.
I agree that more people should be smacked, even though it’s assault and battery. Laying a beating on somebody in front of hundreds of witnesses is not a good risk. I guess if it’s in the chivalrous Defence of a woman’s honor (particularly one’s wife) then I guess you can just walk.

Good piece! You “crushed” it. An important category of this mediocre male fragility seems to be the slightest whiff of questioning of faux-feminist dogma. It’s as if they believe simping, cucking, bombastic-yet-treakly ranting directed at other men will somehow get them laid.

(This was apparently “unclear”)

Wheaton makes the point that fragile white males are obsessed with man/explaining in minute detail what others should do vis-à-vis some standard of political correctness. I was trying to point out that there is a subcategory of fragile white males who do this around pseudo-feminist dogma. The slightest hint of interrogation of women’s issues sends some FWMs into a blind rage, typically without even reading what one is saying. I further wondered if this behavior were some kind of attempt to curry the (sexual) favor of womanhood generally. In other words, is it some kind of pathetic, simpering, contemporary form of chivalry, and if so, just like conventional chivalry, mightn’t it serve to keep women as a group firmly stuck in their current socio-political place?

Posted by jayushkin at 3:46 PM No comments:

These images shrunk down from 600dpi scan, hopefully better 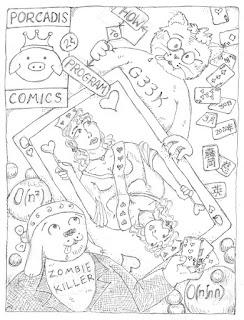 Posted by jayushkin at 4:09 PM No comments:

漫画 How to Program Part I Color Cover

These images shrunk down from 600dpi scan, hopefully better 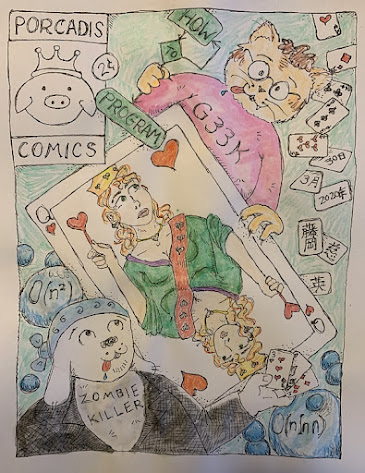 Posted by jayushkin at 4:04 PM No comments: