What if Putin gets backed into a corner? 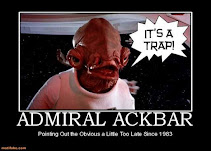 Yes, we cannot leave out the chance that Putin will pull an Emperor Palpatine in Episode Six: The Return of the Jedi and suck us all into “It’s a 🪤 Trap!”.

I greet exclamations of “Putin miscalculated” or “Putin’s alienated from his inner circle ⭕️ “ and such with hopeful caution. He could pull a Palpatine, since, as DJT observed, “He’s a genius.” Perhaps to be taken with a grain of salt 🧂 , however, if the primary criterion for geniushood is having outsmarted DJT!
Hopefully the Ukrainian resistance will pull a Skywalker on him and that will be that.
Where oh where are Hemingway and Orwell and “Homage to Odessa” and “For Whom the American-made Shoulder-launched Anti-tank Missile Tolls”?
At least we’ve got Sean Penn. how’s he bearing up, I wonder?

That Harry J. Kazianis guy really laid out an hysterical catastrophizing screed, eh? Not really saying much. Yes, pictures of blown up buildings and dead people from World War Two, there’s such a thing as nuclear weapons, yeah, we know that. That’s all happened in human history.
Appeasement started WWII and rigid adherence to treaty obligations started WWI. He doesn’t even mention those obvious and highly relevant facts. Can we learn anything from these two cases? We’re currently waffling on our treaties vis-à-vis Ukraine 🇺🇦 (bad? good?) and we’re kind of appeasing Putin (bad?) kind of mobilizing and imposing sanctions (good?).
A no-fly zone seems like a big deal, a watershed. Can’t we declare a no-fly zone before we start enforcing it? Can we declare a small, or patchwork one, and expand it later? Can we start by dropping candy bars 🍫 and shooting paint balls 🔫 and then go to live ammo?
What about coordinating weapons tests with the Ukrainians and just blow some shit 💩 up in the middle of nowhere or kill off some livestock with a submarine-launched cruise missile 🚀 carrying a neutron bomb 💣? Stuff like that?
“Hey, we were just testing some stuff with the Ukrainian 🇺🇦 military”
“Hey, we’re just dropping candy 🍭 bars on the troops”
The question is still ultimately psychopolitical. How will Putin react to any of the number of things the West might do? Is there anything unilaterally the USA 🇺🇸 can do that is guaranteed to make things better?
One or two writers mentioned the obvious thing—a post-Putin world. The oligarchs kick him out?
If there was any guaranteed shit 💩 that we could do that would be guaranteed to make Putin behave one way or another, for sure, whether it’s save Ukraine 🇺🇦 or give up Ukraine 🇺🇦 but nothing else, or prevent nuclear ☢️ war, or make doggies 🐶 and kitties 🐱 be friends, then maybe we could just do that. But it seems like there isn’t, so we can’t.
Maybe we should take all of Putin’s and the oligarchs’ kids (who are all students in the west) into “protective custody”. I think we can do that. Rule #1 of being a pariah state 🇷🇺 is your kids aren’t welcome in other countries.

Article in the ATLANTIC MONTHLY

In !e Spectator, Harry J. Kazianis warns that backing Putin into a corner could result in the use of nuclear weapons:

If both sides can’t come to a deal, Putin may decide to truly go all in against Kyiv, determining that a scorched earth policy and winning at any cost is better than taking weeks or months to take the country in full. !e level of carnage we would see would be something akin to images from World War II: bombed-out cities, bodies on the streets, and total carnage everywhere. !e world would be horri"ed—and would demand action against Russia. What would the West do? It’s likely that more weapons would #ow into Ukraine on a grand scale, putting more pressure on Putin to respond. More sanctions would then follow, including disconnecting all of Russia’s banks and "nancial institutions from SWIFT, including entities tied to Russian energy, the lifeblood of Moscow’s economy. At that point, Russia’s

Citing similar concerns, National Review editorializes that Putin should be given some way to avoid complete humiliation:

!ere is a danger that Putin—trapped and risking…

Posted by jayushkin at 5:20 PM