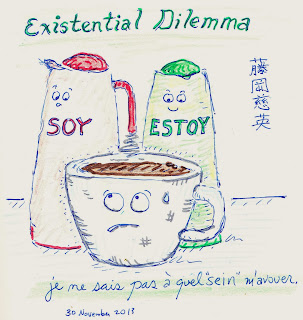 Posted by jayushkin at 11:22 AM No comments:

Check out these Mermaid Puns in Japanese and please watch out if you are put off by mermaid nakedity or edgy political commentary.

You can also check out A Trip to the Full-Service Native American  Bank, which has a lot of Japanese jokes and text in it as well.

Please print out any and all that interest you, or comment on the posts and ask for specific explanations and translations and I will try to provide.

NOTE: there is a missed humor opportunity on the one with the peanut butter sandwiches which we can hopefully discuss next class or sometime soon!!  Please give it some thought.

Okay, so we'll also be covering radicals in kanji, so check this out, and I'll cover it.  We'll also want to teach everybody how to use jisho.org unless you already have a site or dictionary program you like, since we basically look up words and characters throughout the class.

Please feel free to post against this post or anywhere else on this blog and I will try to answer and/or repond in class.

PS: we will try to come up with names for everybody in Japanese (cuz it's fun). 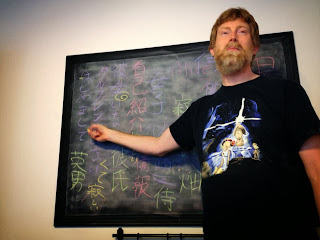 Posted by jayushkin at 12:11 PM No comments:

Yeah, it seems unlikely that it was a deliberate choice of Kanji to spell out "Matorikusu"  Though that is kind of cute, but "devil chicken in some obscure species of tree" doesn't really say much, not much commentary or humor value, so whoever did it probably just looked up a bunch of random characters in a Japanese dictionary, picked the one's that looked coolest (devil, meaning aside, and chicken, are pretty cool-looking as kanji go) and had them inked permanently onto their bodies (like morons -- how about inking some Arabic on and finding out later it spells "Down with Allah," genius?).
I have no idea how those characters would be read in Chinese.

Having said all that, it is a valid humor form, in Japanese, to make puns and double-entendres where the pronunciation of the characters and the literal meaning of the characters themselves mean two different things and has an ironic or humorous sense.  This can be using all-Japanese or with Englishy stuff, too.  A couple of ma-ma-ho-ho examples (let me know what you think!) are:

However much you appreceiate the above, I think it's fair to say that "The 魔鳥楠 has you, Neo" is not an especially good one.  (^_^).
Posted by jayushkin at 11:43 AM No comments:

Happy Thanksgiving (and end of NaNoWriMo 2013) 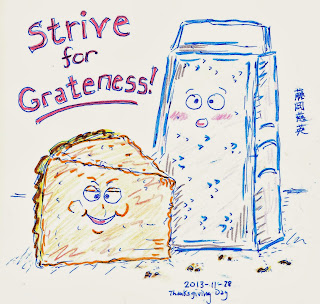 Posted by jayushkin at 10:45 AM No comments:

This is about the cutest thing I've ever seen! 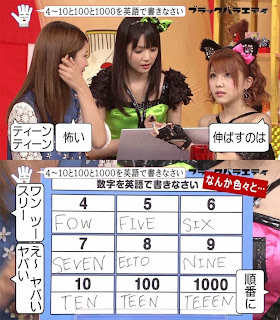 I wonder what a million would be?

A buddy of mine once mentioned how much more fun CS lectures on comparative languages would be if car and cdr  in Lisp  were replaced by hee and ha.  (wait for laughter)  Kind of the same idea as here, no?

This is comparable to this one time when a gaggle, not quite a bevy, of cuto-chans scampered up to see my son on the beach in Hachi-jo-Jima one time and didn't know the name of the game Peek-a-Boo  in English.

Actually, it's a lot to ask a person, even a "well-educated" person to count -- at all -- in any other foreign language.  I guess I can count up to about a gazillion (well, technically about a hundred trillion, but being able to make my point after that) in Japanese, well into the trillions in French, Spanish, and possibly German (I can switch to scientific notation, unlimited, in French), I used to be able to count to 99 in Chinese, but now I'm lucky if I can get to four, and I can half-assed read some of the numbers in Arabic (certainly one through three -- with no idea how to say them).

So yeah, it's actually kind of a big deal to learn some of  that stuff.  So if you wind up on  a game show and they ask you  to count as high as you can in Swahili, don't feel bad if you flub it (unless you're from Kenya or something...).
Posted by jayushkin at 10:42 AM 1 comment: 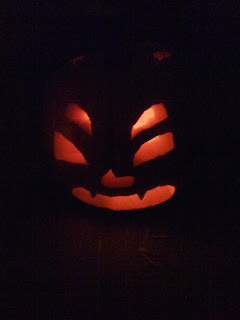 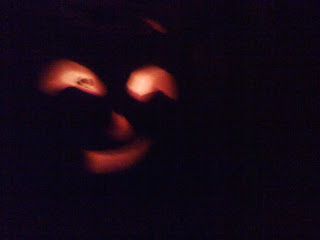 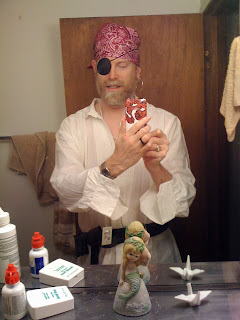 Posted by jayushkin at 2:48 PM No comments:

I'm the co-ML for NaNoWriMo!

Here's a recent write-in at Cafe Artista in Moscow. 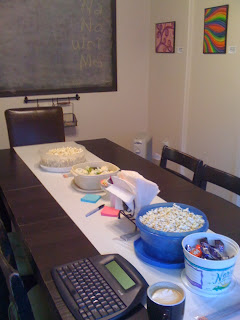 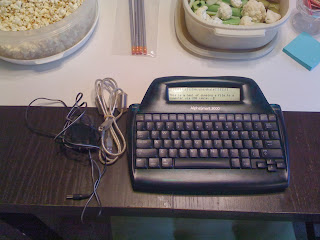 Posted by jayushkin at 2:46 PM No comments:

And the breath with which I waited,
Once upon a time was bated,

But long since have I breathed and gasped,
And glimpsed your surface-loving craft.

Received wisdom's banner unfurled,
For that is how you view the world.

Skipper would make you walk the plank
Were not your mind a docile blank.

You are content to swab the decks.
The rocks of truth shall be your wreck.

I know one day that you shall step
Into these self-examined depths.
Posted by jayushkin at 6:38 AM No comments: