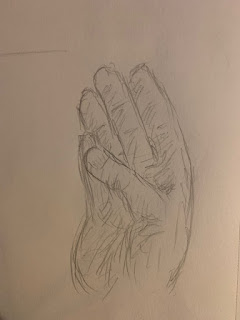 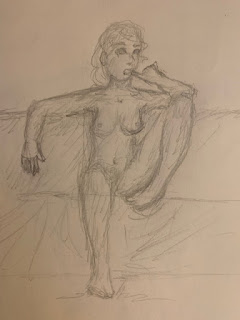 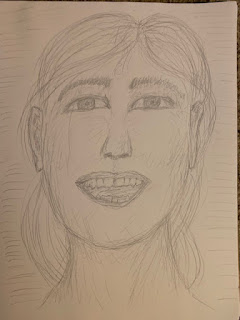 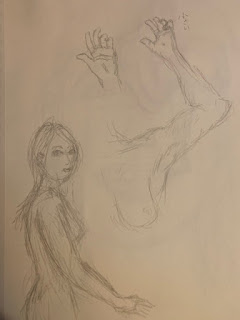 Background
I'm going to be writing a novel this November as a textbook for Macromemetics. I want to illustrate the basic principles and some of their functions in allegorical stories with a group of characters who learn the principles along with the reader.

Overview
One of the basic principles of Macromemetics is that of the memetic reward, or memetic orgasm. It may be as yet a bit ill-defined, however, it's also something that should be able to be observed experimentally, e.g., via medical experiments such as MRI imaging of the brain, as a stimulation of the reward centers of the brain. When a person enacts (or "deploys") a meme, an imitable action, such a speech event, a physical action or gesture, there is some kind of response that they "expect" from their fellow human beings. This expectation is called memetic debt. Getting that response triggers a memetic reward, and this is called memetic resonance (1). The process of enacting a meme, expecting a response, or incurring memetic debt, and enjoying resonance represents a memetic loop. Until the loop is closed, the individual carries or "suffers" residual memetic debt.

Where Micromemetics Gives Way to Macromemetics
All of this, enacting memes, incurring memetic debt, carrying (residual) memetic debt, enjoying resonance, closing memetic loops is Micromemetic in nature, i.e., it is all experienced at the level of the individual, as opposed to the group, or cohort, but it is foundational to the group-level study of Macromemetics. The study of how individual brains process memes, how we evolved to do this is covered in Susan Blackmore's The Meme Machine and elsewhere.

There are a number of ideas that are foundational to Macromemetics. Humans evolved big brains, mainly big pre-frontal cortexes, in order to model the behavior, the "feelings," of large groups of fellow individuals. The size of this group, about 150-200 individuals, is the Dunbar Number. This allows us to act in large groups in a coördinated fashion. It gives us a high degree of empathy, it allows us to predict how others will think and feel and act. The "double-wiring" of our brains gives us the "monkey-see, monkey-do" capability of seeing someone else doing or experiencing something, and allows us to truly feel what it would be like to do or experience the same thing, and to laugh or cry or imitate a skill (including speech) as though we were doing it ourselves, even down to the levels of our muscles and nerves.

Quite by accident, we created a second replicator, the "first replicator" being genes, which compete with one another within our reproductive biology. The second replicator consists of memes, or imitable behaviors (skills, gestures, speech, etc.) which reproduce and compete with one another in our brains and through our ability to imitate one another. This whole mechanism has been thoroughly researched already, and I take it all as a given in elaborating the field of Macromemetics, just as an evolutionary biologist studying a given genetic adaptation moving through an animal or plant population takes genetic selection as a given.

Macromemetics is the study of the behavior of (large) systems of memes in (relatively) large populations of human beings.

Summary and Conclusions
Macromemetic evolution is driven by individuals' desire to get resonance, which is effectively getting empathy, understanding, from fellow humans. Successful memetic agents do this reliably. They are successful at predicting which memes they have at their disposal are more likely to resonate with their given audience, whatever that may be. This idea explains why live performances are more "powerful" than filmed ones, why humans seek power and fame, why cultures and languages tend to remain static over hundreds of years, and also why they split up and evolve.

By extension, understanding of how this all works, how to identify and measure memes and memetic interactions, to characterize the laws of such large systems of memes, should explain war, genocide, politics, oppression, social malaise (or health), crime, successful marketing campaigns, large-scale economic behavior, and so on. It should also allow us to engineer large-scale human behavior, or to determine whether a given enterprise, sales campaign, motivational scheme, political campaign, military effort, organizational restructuring, or what-have-you, has a chance of success or not, and what it's likely to cost.

This is the goal. The construction of a new body of scientific and engineering expertise with the capability of understanding and ultimately ending large-scale human misery.

(2) A couple of cases where doing nothing might be a nudist colony, where the act of taking off one's clothes might be otherwise considered anti-social and meet with a negative response, in the colony it meets with no response, and that in and of itself is the reward. Another might be a meeting of racists, which making racist comments might be accepted, meeting with no comment, instead of the negative reactions one might see in the general society.

(3) Another positive memetic response to the enactment of a meme is for others to simply imitate it. One human does something cool, and then others try to do exactly the same thing. Obviously, this is a very common human experience.

(4) Doing nothing as a memetic resonance is to be distinguished from alienation, which is where one's audience does not react (5) when some reaction is normal or expected.

(5) An example of this is Reagan-era America's response to the 1980s AIDS crisis, which, up until Ryan White, only impacted gay men. The response was nil, i.e., an entire population who was losing hundreds of thousands to a horrible plague was completely ignored, until, and only to highlight the memetic alienation (6), a young heterosexual boy, Ryan White, contracted the disease, prompting Presidential and nation-wide attention...which they should've been doing all the while up to that point, obviously.

(6) Memetic desolation, possibly the same as alienation, is a state in which an individual or group has little or no memetic inventory to deploy vis-à-vis the attendant cohort. Imagine a foreigner living in a place like Japan, where they don't speak the language or understand the culture. As such, they have few if any memes they can deploy with which the local population will be able to resonate (desolation) and have little luck getting responses from the locals to their foreign memes (alienation). Such a person would not, however, be oppressed, since they could still get their needs met by getting food at local shops and restaurants, and watching foreign TV over WoWoW.
投稿者 jayushkin 時刻: 18:54 0 件のコメント: 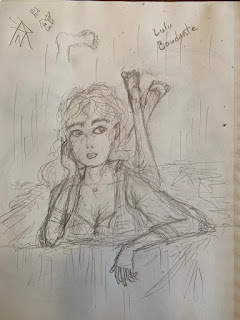 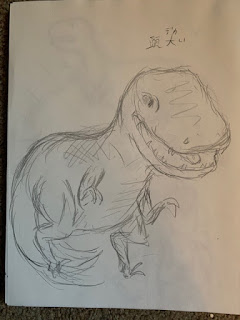 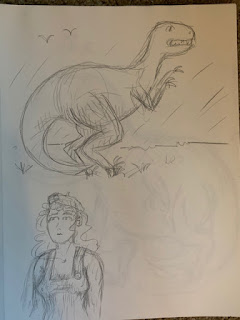 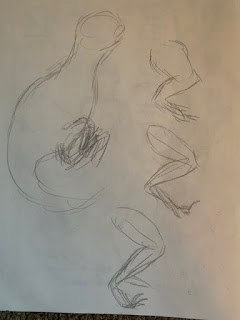 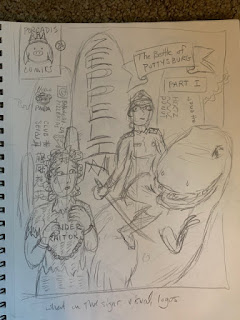 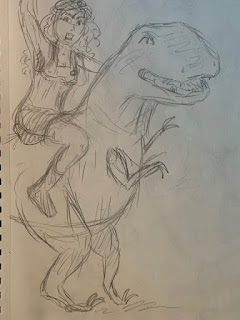 模倣子 Why are Laughter (and Tears) Contagious?

Introduction
Laughter is the goal of comedic performances, as well as any effort, political or otherwise, to heap derision and ridicule on someone. I like to think of these as 'leaf nodes,' i.e., there is no transition to another clearly determined memetic state from a state of laughter or crying. Is that even true? However, if somebody is laughing (or crying?), is our being drawn to start laughing as well an example of a memetic phenomenon? Do we get a memetic reward from starting laughing when others are already doing it, or even just starting up ourselves when we perceive that the time is ripe?

Are things like applauding or giving standing ovations similar?

If They Laugh, It's A Thing
Comedy is the subversion of expectations, and these are psycho-cultural in nature. This description is fundamentally macromemetic in nature. I have long advocated whether something is in the media, or whether it makes people laugh as a razor for determining whether a given meme is part of the supermemeplex, and also how it is connected to the system and how it is used.

Sad Songs
I find that I cry upon hearing the US National Anthem, and indeed other national anthems as well (1). I also cry upon hearing any number of other songs. You can think of a song as a MIAO, but you can also think of it as a sequence of memes (words, notes), so for an individual, or a cohort, it's a sequence of memetic states that one jumps between, one after the other, to finally arrive at a state where one is weeping or feeling some other feeling.

Blueprints for Experiments
An interesting filter for which memes could be of interest to investigate, or which systems of memes, could be those that make people laugh. Why do the French (supposedly) laugh at Jerry Lewis movies? It probably says something about French culture. But what does that mean? It probably says something about some of the minute details of the structure of French culture. Do Americans laugh at Monty Python because of how it explores fundamental human existential absurdity using the lens of British upper-middle-class culture and history...or is it just the funny accents and the superficial silliness?

If something makes people laugh, that means they have internalized the MIAOs and memeplexes that allow them to resonate with the memes that make up the comedic content. Start with the laughter and 'work backwards.'

Further, rather than MRIs or such to identify the reward centers (3) of the brain, coming up with a set of memes that induce comedic responses, how these are set up, how subjects interviewed (2) follow paths that lead to a laughter response .

Summary and Conclusions
The hypothesis is that laughter (and tears) are a memetic resonance response. It follows that the telling of a joke, the setting up of a comedic situation and eliciting a laughter response from an audience (cohort), is an example of a successful memetic deployment by a memetic agent or memetic nexus.

It further follows that the memes deployed to set up the joke, the MIAOs, are all part of the memetic inventory of the cohort, hence we know them all and their structure and memetic state interaction matrices a priori. Starting from the laugh and working backwards to the set-up, we effectively get a memetic state transition sequence (memetic loop) 'for free' that we know leads to resonance. It's much harder to just 'dive into' the sea of the memetic inventory of a cohort and start cataloging, hoping to unearth some memetic loops in the process.

It's an easy path to getting a lot of meaningful pictures of some of the memetic transition matrices, memetic loops, and state transitions. It could also point to actual memetic nexuses, which may be harder to spot than one might think (4). An end-to-end memetic loop is nothing to sneeze at, even if it's not a 'complete' picture of the whole supermemeplex (5).

In short, if they laugh, it's a thing, and you can easily get a picture of a fairly complete set of memetic transitions within the system.

(3) Which is still a super-good idea, by the way -- it's just that comedy would probably be cheaper and easier to carry out, easier to get lots of data from.

(4) One could imagine various kingmakers or éminences grises that would be hard to find without a deep memetic analysis of some kind. It may not be that all memetic nexuses have their own talk show, best-selling book, or hold high office. 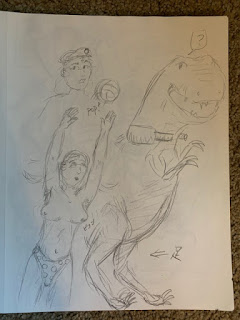 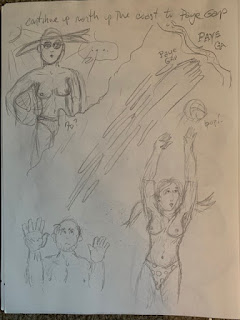 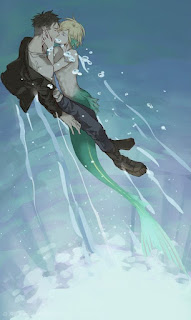 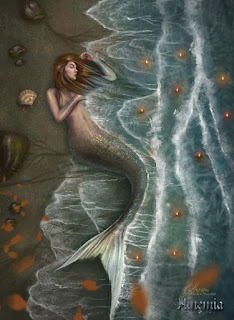 漫画 Louise and Nelson on the beach 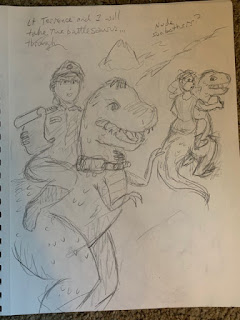 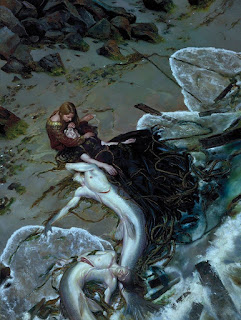 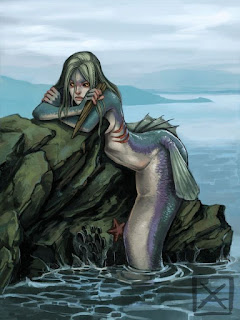 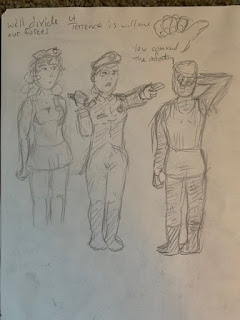 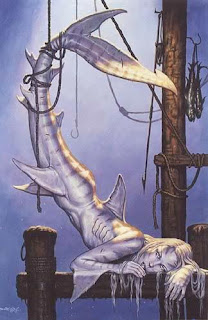