模倣子 His Body, Somebody Else's Choice 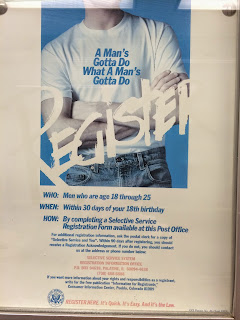 This is the most sexist (official) sign in this country.  For women, "Her Body, Her Choice," but for men, "A Man's Gotta Do What A Man's Gotta Do," or in other words, "His Body, NOT His Choice."

If women, on the other hand, feel like they are being forced into important choices, by society, by "The Patriarchy", and as often as not by other women,  and while this is all probably true and as bad or worse than we all think, it can still be changed, made better.  There is no fundamental reason why women should not be free to do (or not do) whatever they want. Any time this is not true, it can be fixed.

Men, however, are expendable, so any time there is a war to go and die horribly in, an awful job like coal or uranium mining to be done, or other miserable conditions to be endured for "the good of society", men are going to have to do it.  Women may have the option to join in, but they also always have the option not to. Men don't.  They only choice is for society to decide that they don't need uranium or coal, or don't need roofs on houses and buildings, don't need to fight and win wars, and we may never be able to decide those things.  Women are half of that decision, and so far they haven't been much help, it seems.  In some cases they are 100% of the decision (like circumcision, etc.).

We should liberate women because it's possible. If we are to ever liberate men, if it's even possible, which it may not be, we have to liberate women first for that very reason.  We may never be able to liberate men, however.  It may just not be possible.  It would be nice if this fact were recognized and men's suffering recognized as inevitable and given the respect it deserves (which it in some ways used to receive).
Posted by jayushkin at 11:14 AM