The Problem with Meltdowns
Chernobylite. The name for the combination of fissile material (uranium) of the melted core and other stuff that melted into it as the whole thing poured down and melted through the reactor building. The same thing happened at Three Mile Island, i.e., the melted uranium-oxide of the core pooled at the spherical bottom of the reactor vessel, then kept going, straight down.

Wait. Isn't a spherical geometry a "critical geometry"? Critical mass and critical geometry are the wrong way to go when you want to slow a nuclear reaction to a stop. Concentrating all of the fissile material into a single space, especially a roundish, blobbish space, makes the reaction maintain itself, or get stronger.

How to Curtail a Nuclear Reaction?
It would help to separate the fissile mass into smaller, separate bits which are thin and separated from one another. This makes the neutrons which fuel the reaction have to pass through longer paths, paths which do not contain large masses of more fissile material.

A big thing is to collect the liquid fissile material before it pools in the bottom of the reactor vessel, with an unfavorable spherical and critical geometry, promoting rather than curtailing the nuclear reaction. Next it quickly melts through the bottom of the vessel onto the concrete floor of the containment building, and then into the ground (2) (still in a blobby, spheroid shape), for several dozen meters, until the reaction eventually burns out enough of its fissile material that it starts to cool off and slow down.

Proposed Solution
We need some kind of "catcher" at the bottom of the vessel, made of some refractory material such as Wolfram (tungsten) or a ceramic, able to resist the heat of the melted uranium. This catcher needs to be big enough to contain the entire volume of the melted core material. It should also channel the melt (1) into a non-critical geometry, i.e., spread out, thin, disconnected, like a snowflake, a waffle, or such.

In order to accomplish this, my idea is that the catcher should be made up of a number of "plates" which minimize the critical geometry of the liquid pouring into it, and then when a plate fills up, the fluid pours out the bottom, into a similar plate beneath it. It would kind of look like an upside-down egg carton. 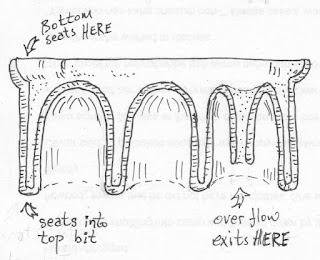 The design above, square (see below) can be stacked up, and the overflow holes rotated at each level so the overflow fills up the next level before flowing down to the level below that. 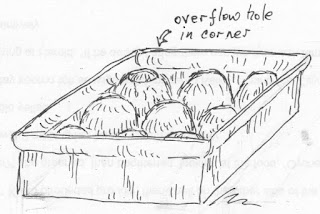 Here's what the whole device looks like. Notice here and in the diagram above that when it's filled with liquid, that liquid is in narrow slots, like a waffle, and when it rises to a certain level, it pours through the hole in one of the "bumps" (to the next level below). Note also that the "catcher" is of the same thin thickness everywhere, exposing a high amount of surface area of the melted fissile material to cooling fluid (such as the air in the evacuated vessel). In other words, the ratio of volume to surface area of the trapped fissile material is low. This provides the double benefit of defeating critical geometry and critical mass, in addition to maximizing cooling surface area.

(2) This is where the term "China Syndrome" comes from. The core melts through the Earth until it gets to China...get it?

Posted by jayushkin at 6:43 PM