Foreword
The caste system guides the individual in his day-to-day activities as well. Each caste has its own behaviour patterns to be followed by all its members in all important matters like dress, diet, ceremonial observances, and rituals at birth, marriage and death etc. 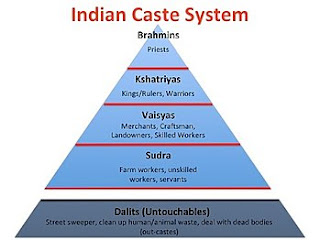 I don't think it's too much of a leap to see American racism and sexism as functioning something like a caste system. Depending upon who and what you are, your race, your sex, you are allowed or not allowed to do certain things, to go certain places, to participate freely in certain activities.

Introduction
The things that one is "allowed" to do seems like very much a macromemetic concept, that is, memetic interactions are how this is mitigated. It's as if who one is, race, sex, wealth, age, etc., are like "memetic gestures" that others experience. Better still, perhaps, "memetic states," rather like the Blue Shirt Tuesday doughnuts experiment (1), in which whether one is wearing a blue shirt determines whether one is "allowed" to eat a doughnut. Being "allowed" to eat a doughnut is determined in a practical sense by whether the surrounding people are likely to deploy supportive memes (recognition that you did something good) or bullying immunomemes. The availability of these memes is directly related to the memetic state, which is effectively a matrix of memes that are available in the given state, and also to which state the system next transitions if a certain meme is deployed in the current state.

Marking
There are a lot of issues at play here. One is whether the memetic state is clearly understood at the time of deciding to deploy a meme. The operative concept is marking. A system has poor marking if the status of a memetic agent is unclear, if the meaning of memes enacted and icons/MIAOs used is unclear. This results in memetic agents being uncertain as to which actions they may take, if any, in response.

A lot of racist, sexist, etc., systems have an inventory of immunomemes especially for dealing with "spoofers," or "fakers," or those trying to "pass" as something else (2). This may be a one-way affair, as the Rachel Dolezal incident highlights. Pretending to be a higher-status caste member is met with hostility, while pretending to be of lower caste may meet with little or no resistance. What things affect this, and why this should be may be a topic for another essay.

How It Works
Suffice it to say, in order for a caste system to function, it has to be clear to all concerned who is a member of which caste. There also must be immunomemeplexes in place to allow cohort members to attack those who try to act outside of what is permitted to their caste, or (God forbid!) try to pretend to be of another (higher) caste, and thereby act outside their caste.

Just for the sake of discussion, let's try to imagine the stereotypical 1950s office or other social and work setting in the United States, and what kinds of memetic transactions a woman or an African American person might be involved in which might illuminate how the memeplex functions, remembering that comedy and drama are touchstones of truth (3).

I was watching an episode of Stranger Things, and setting aside what one might think about the writing on that show, it depicted a young woman working in an office, and any ideas she had were automatically mocked and greeted with peals of laughter from the older male staff (unless they involved getting coffee or sandwiches, and even still). Laughter is a physiological memetic response, and it also "leaves nowhere to do," i.e., it is a final memetic state. This is, by the way, one of the ways that someone of a lower class might be treated if they tried to do anything outside their own caste boundaries, another one being violence, which is a go-to memetic response when it comes to African Americans.

Careers like nursing, K-12 teaching, and of course homemaking may represent "safe spaces" where women could be safe, have self-esteem and self-determination, respect, and make an independent life for themselves. Women working in offices might be subject to all kinds of immunomemes, even when it became nominally "acceptable" to "work outside the home." Having ideas in the areas that men develop ideas invited mockery, threats of termination. A woman in an office might be the target of unwanted sexual advances. A woman walking home unescorted could also be the target of sexual harassment or violence. Presumably the police are there to offer protection, but that may not even be true.

African Americans face many of the same attacks, and more, and many immunomemes they face are coming from the police themselves. Why don't the police protect them?

Are People Evil?
This is not really a question that macromemetics can answer. The answer is, I believe, that people enact whichever memes they see as offering the greatest memetic reward from their fellows in a given memetic state. In our 1950s nightmare, someone threatening a woman walking home from work as night approaches seems horrible, but it's something that's in everybody's brains, and that's why people do it. There's either a) everybody will laugh or participate (feeding frenzy), or b) they will see it and let it pass, ignore it.

Historically the police's role was to harass African Americans. If an African American was walking around, unescorted, then they were up to no good, a runaway slave, and the police's first job was to stop them, find out their story (which they assumed was a lie), arrest them (which was assumed they would resist violently), take them into custody, lock them up, and after that nothing since somebody would come and collect them if anybody cared. Like it or not, that's the system that was produced by hundreds of years of chattel slavery in this country. A lot of immunomemes specifically directed at African Americans, and none of them very nice. You can't just erase them overnight, or with the stroke of a pen.

Dismantling Caste Systems
I hope it's obvious by now that you can't stop racism and sexism by having somebody in high authority just saying, "Hey, now, y'all just be nice, now, stop doing that stuff, you know what I'm taking about," which is pretty much what we've been doing, whether it's with those very words or through some legislation (4).

You need to identify all of the immunomemes which may be deployed against targeted populations (women, African Americans, et al) and find a way to replace them with new ones, any new ones. That's the key thing. It's like with all mememtic engineering, packing the meme space is key. By trying to just throw out all racist and sexist harassment and violence, you're creating a vacuum, and the old immunomemes are just going to fly right back in (or worse ones!).

A really silly example that popped into my head, and it might not be a good replacement meme (but it might), is that a cop might hand out their business cards to people they made contact with, without probably cause, instead of arresting them, laying a beating on them, or killing them, and said business cards could have the number of the Cop  Shop and a code for that particular cop. The non-perp could then call in and close a memetic loop, either leaving a message or just entering the code and hanging up.

Conclusion
Sexism and racism may behave like caste systems.  This is interesting since it could be an example of a memetic system actual evolving or being artificially made to carry out a certain task that supports human life. It seems that the presence of a victim may produce a memetic state where a memetic feeding frenzy, similar to a memetic orgy, may take place. In any case, the relevant memes must be replaced in order to dismantle the system. It's not useful to see the "perpetrators" as "evil," or "psychopaths," or "hypocritical," per se, though a psychologist might term them as such, since if anything that only makes it harder to disinure the population of the racist/sexist submemeplex. Note that the victim caste needs to be disinured as well, and this may be the more difficult. All stuff for future essays.

(2) An example where fakers seem to skate by is pretendians. This may be precisely because of a lack of immunomemes to catch fakers.

(3) If it resonates with an audience, then it's a thing. By that I mean that it's a possible, or believable, memetic transaction

(4) The 13th Amendment is particularly bad, since it makes things even worse. To paraphrase, "So if y'all want to keep doing all that racist slavery stuff to those folks, or actually, now to any folks you want, you can, but you just have to get them convicted of a crime first."