Allies perform a couple of useful functions: enabling a beneficiary to successfully deploy memes they could not otherwise, and thwarting attacks from other agents. I'd like to explore how these functions might be described using the macromemetic notation I've developed and which I've been using throughout my essays.

In future writing, I hope to explore the motivations, the memetic benefits which allies might enjoy for being allies, and also how to cultivate them, i.e., how to build a network of allies for oneself. I also want to fairly soon explore how having allies changes the structure of a memetic system.

Before all that, I want to get some solid notational principles down, which I hope will inform these further investigations and provide rigor.

Simple Example: Getting a Job

Effect of an Ally 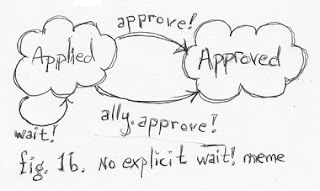 The aforementioned notational subtleties apply to immunomemetic notation as well, since there's also the concept of a "hidden state" or a "compelled state" (1)

(1) Compelled State: See also "hidden state" (2). The first law of macromemetics states that the deployment of a meme results in a state change in the system. Effectively this takes all agents to the new state, whether they want to go or not. The major effect of a state change is that it potentially changes the set of memes which are available to each agent for deployment. A compelled state is special in that some or more agents are compelled to deploy certain memes, e.g., there is no "stay on the pot and continue not to shit" (do nothing) option, i.e., one must "shit, or get off the pot," or in poker one must check, raise, or fold (and if there is a bet outstanding, only the last two). Another real-world example is the passive-aggressive matriarch at the family High Holiday of Thanksgiving or Christmas or Easter or other stopping everybody from eating and forcing them to pray. The "we have to say grace before we eat" meme creates the compelled state where everybody must immediately put down their forks and knives, drinks, stop talking and listen to the matriarch offer the prayer. Compelled states happen all the time in human affairs, and people dislike them, try to avoid them, and chafe greatly if they are abused.

(2) Hidden State: This is similar to a "compelled state," and indeed a compelled state may generally be thought of as a type of hidden state in that it doesn't really exist, or need to be explicitly displayed in a state transition diagram or in a list of deployment descriptors, because other agents are "compelled" to deploy memes in response to the meme initiating the change of state, so that state effectively does not exist. We have a meme which immediately triggers another meme. The first meme would send us to a given state, but this never happens and we immediately go to the state triggered by the second meme. This can happen by the action of an ally. For example:

These all start in some Start state. In #2, the protege would go from Start state to Obscurity, but they are "intercepted" by bullying memes (immunomemes) from the enemy agent, and so they go directly to Humiliation. In this sense, Obscurity is a hidden state, since the protege goes there first, and then the system immediately transitions to Humiliation. This is not a "compelled state" since nobody is forced to deploy any memes for this transition to take place. We see here the action of immunomemes (3) in this notation and description, i.e., that an agent deploys a meme which they expect will result in a transition to a given state, e.g., Recognition (or even Obscurity, if this fails) and yet we end up at Humiliation by the action of another agent, deploying a meme, in this case an immunomeme. In #3 above we see a kind of special case of a compelled state, if we think of the ally being compelled by the protege (beneficiary) deploying her recite! meme to rush in and help.

(3) Immunomeme: a meme whose function is to override the first-law transition of a memetic system to a given state determined by a memetic deployment, by "intercepting" that memetic deployment and directing the system to another "safe" state or back to the original state. The effect of an immunomeme is to curtail the deployment of or blunt the impact of deployment of novel memes, or memes deployed in novel circumstances, or agents doing new things, in other words, to put a brake on memetic mutation. The deployment of an immunomeme involves a hidden state, possibly a compelled state, before the system reaches the immunodiverted destination state.

Posted by jayushkin at 6:07 PM