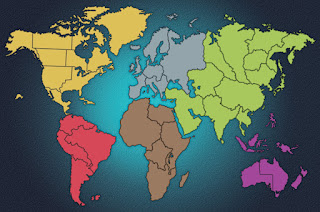 Having castles or factories, and having allied armies and special advantages to using both.

You can turn in sets of cards, just like in regular risk

A fourth factory added to the same territory produces ten armies per turn, that is, the equivalent of five regular factories, and is represented by a special super-factory token2.

1Is this true?
2Do the numbers work well with this? Should the super-factory be given extra powers as well? For example, a super-factory/castle must be surrounded on all sides in order to be taken. Does that provide too much of an advantage?

In two-player play, each of the remaining four armies would be assigned a poker suit, that is, hearts, diamonds, clubs, or spades, or, ♥ ♦ ♣ ♠.

Every successful turn, a player would not only receive a Risk card, but also a poker card, again, up to five. If five Risk cards, are drawn, they must be played, that is, for factories or armies, but if a sixth poker card is drawn, then one must be discarded.

Should players be allowed to "bet" when playing for allied armies?  What does that mean?  Should they bet armies, Risk cards, or both? Buy armies to bet on with Risk cards?

At the end of their [sic] normal turn, a player may choose to play one of the allied armies. One (or more) other players may challenge. Each challenger counts out as many armies as they [sic] would receive if it were their [sic] turn, that is, a player with twelve territories and one factory would get 4 + 2 = 6 armies to bet with. Each player in the challenge selects zero or more poker cards from their collection, sets the rest aside, and are dealt as many cards as needed to get to five.

The objective is to win the poker hand, and with the most and strongest cards (at least one) in the suit of the allied army to be played.

The player whose turn it is begins the betting. "All in" bets are allowed, and that ends the betting for the hand. This is the tricky bit. If and when the current player wins a hand, the challenge ends, bets are settled, and the player plays the allied army with the number of armies due that allied army, not the armies due the player's army. If a challenger wins, then the current player has the choice of resigning their [sic] claim or playing again.

Unlike with poker, whichever player wins has the option of retaining up to the number of cards from their winning hand as would total five with their other cards. In other words, they do not have to lose any cards. All other players in the hand lose all of their cards.

"What happens to the armies?" If the challengers continue to win until the current player gives up or goes broke, they cash in their won armies for their own-colored armies and those are the armies they shall get on their next turns. By the same token, if there is another allied army challenge before their [sic] turn comes up again, those armies shall be the pool they [sic] shall use for betting.

Player A wants to use the clubs