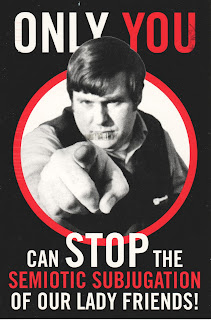 The Science of Memetics proves the equality of men and women once and for all. This is great and welcome news. It also illuminates in detail how oppression, including internalized oppression, functions, and illuminates a path out of it. Slavoj Zizek's discussion of the liberation of minimal elements1 shows a way to do this, and this approach may be analyzed in terms of memetic theory.

By the way, I just finished voting a bunch of my corporate shares, where I invariably vote for all the women as members of the Boards of Directors, and abstain on all the men. I'm a lifelong feminist2, but I'm also just sick of all the complaining, so I'm doing something about it. Some corporations only list the candidate's initials, so you can't tell their gender (so I have to Google them).

1In his example of the German hard-rock band, Rammstein in the film The Pervert's Guide to Ideology.
2I like to think of myself as an ortho-feminist, i.e., someone who really wants to see real women's liberation realized, as opposed to what these 3rd-wave crypto-pseudo-feminists, who only seem to be interested in complaining, apparently only for the purpose of garnering political power and being able to target, attack, and bully people without fear of retribution, without any meaningful agenda of improving the lot of women (or of men, as they also claim to care about).
Posted by jayushkin at 8:52 AM