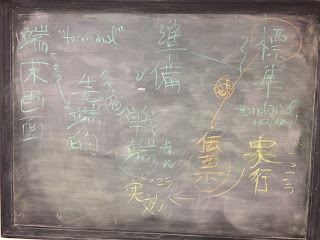 working on some vocabulary from the "CS Homework" (in Japanese). Here we see some relationships between kanjis and words forming a miniature association network for just these few charactesr. 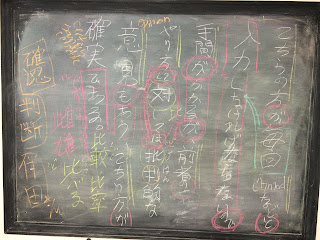 Here's the sentence from the homework. It seems like it's saying something odd about how to use the chmod function (it makes it less convenient to use a script...?)
We have circled particles and marked noun phrases, and the one obvious adverb 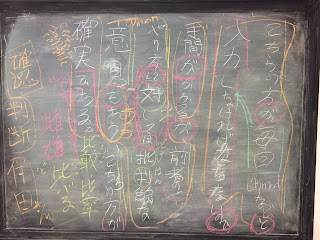 Here we're trying to break it into about four or five or so "semi-independent clauses," more-or-less joined by particles, and which could be independent sentences if their verbs were put into dictionary form. 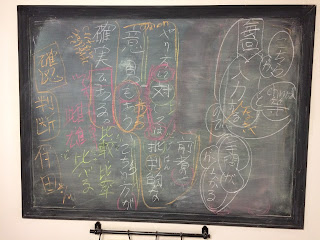 Now we're converting the semi-independent clauses into their Fujioka-Dearien Bubble Diagrams, one by one. 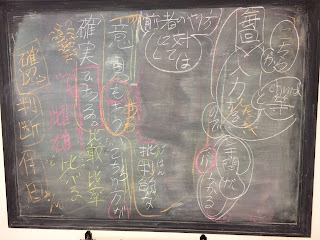 We're getting it done, but it's sometimes a bit unclear what connects to what. In the void in the middle will presumably be the verb, "aru" (to be), but how to put together "how the last person did it" and "running chmod every time [because]" and "it takes a lot of time" is getting tricky, and do they relate to the other bits on the left of the board...or are they separate? 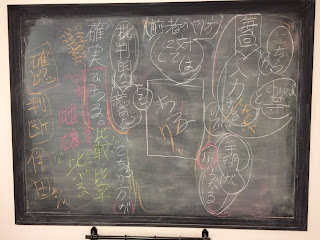 So now we see that maybe "judgemental opinions [exist]" but is this because chmod runs over and over, or "it takes time" or "compared to what the last guy did"? 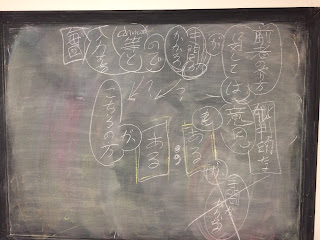 We sort of gave up on the "outside in" approach, i.e., deconstructing the sentence in-place, and went to the "new" approach of identifying the "main verb" and then "building outward."
It looked promising, and then we came to the end of class.

We wound of thinking that this sentence was perhaps not so well writtten, hence the semicolon in the center of the board. It's reads like if a high school girl from Southern California decided to run for political office on a platform that she was not especially committed to. Japanese can quickly start to sound that way anyway.

Oh, my god, it was totally taking so long to run chmod over and over, and so there's like this other way, and I was all "wow!" but then I was totally thinking that there are people who are all judgemental and stuff about their opinions, and like what the other guy was doing, too, and stuff.

Posted by jayushkin at 5:29 PM