Introduction
The idea is that a memetic system, the states, the memes that cause transitions between the states, and the operative MIAOs can be represented in a diagram, and behind that diagram is a description of all those deployment descriptors (2), and from those may be constructed a set of transition matrices.

There are problems with this system as it stands. While it can be good as a design tool, i.e., when one neglects individual behavior and decision making, for working out which memes one wants, and the states and MIAOs to support their operation, it can come up short in terms of modeling an actual memetic system in operation.

One problem is modeling how individuals decide to deploy memes. Another is modeling the states of individuals. Things like "criminal" behavior imply that the criminal tries to avoid detection, which means there are "hidden states" in the system (somebody committed a crime but nobody else knows yet, others know, but not who's responsible, the criminal is caught, etc.). Anyway, more work to do here, but the promise is better and better computational modeling, leading ultimately, we hope, towards a Hari Seldonesque Psychohistory-like tool.

The Blue Shirt Tuesday Memeplex
Here's a memetic state diagram from an essay I wrote. This is from an actual live experiment I conducted. 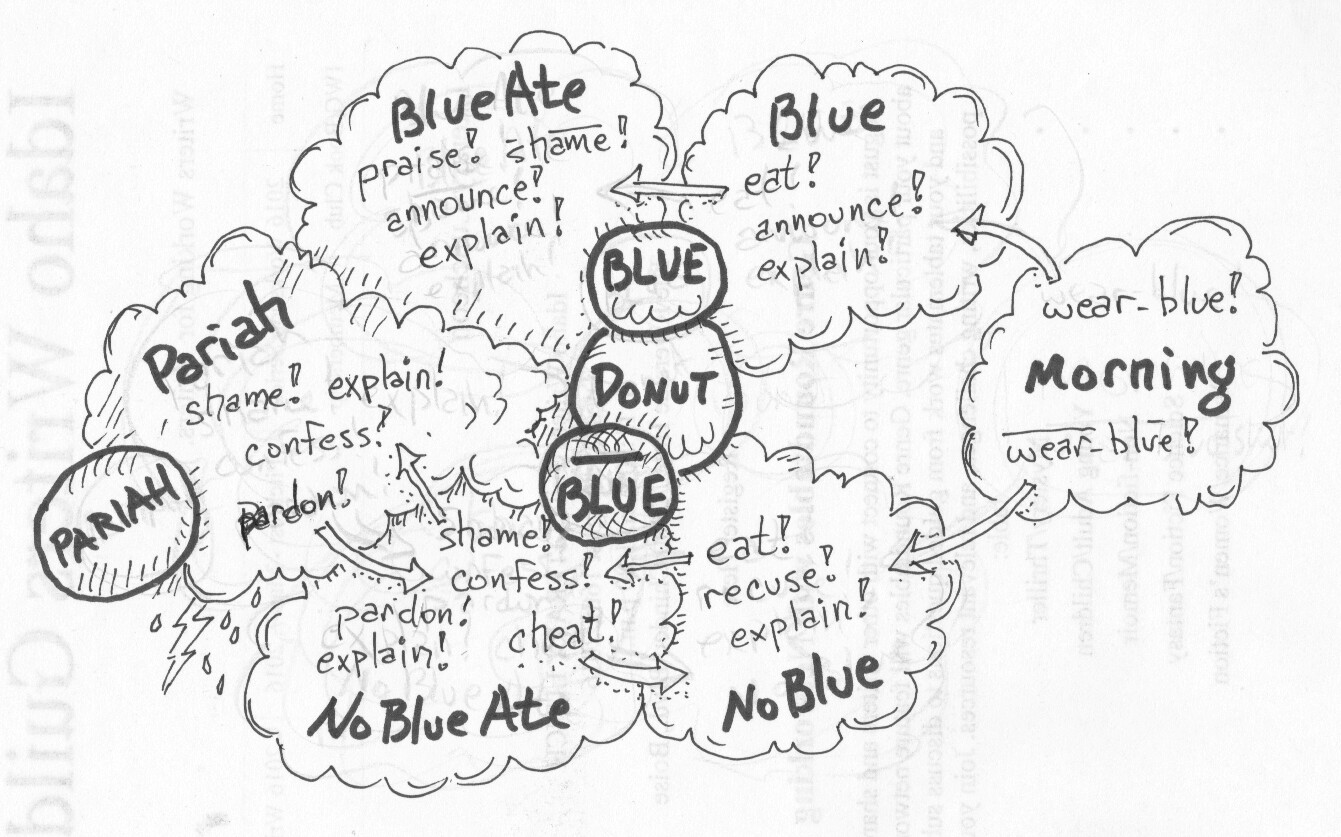 Here're the deployment descriptors (2) for the above system.

Note how "cheating" is modeled by a special cheat! meme that takes the cheater back to a state of NoBlue, i.e., of not wearing blue, but not having snuck a doughnut, i.e., a NoBlueAte state. This is special because it affects the state of the system, but is not a meme exchanged among persons, per se, but only "inside the head of the cheater." In this sense, it's kind of hinting at the idea of idiomemetic systems or endomemetic systems, in other words, systems which are only perceivable by the individual.

Here are transition matrices based on the above. Note how they do not take into account the idea that different agents might have different probabilities of deploying certain memes. This can have relevance in the atrophy of certain memes, especially immunomemes, that keep the system healthy, even if they appear "ancillary" to its primary function. In this other essay I discuss how conformists who do not shame cheaters can be as bad or worse for the long-term healthy functioning of a system as rebels or even criminals (9).

An Example Where Agents Figure in the Matices
Here's a set of memetic transition matrices for a fairly arbitrary sample memetic system which I whipped up as an example in my Escaping Meme Hell through Play essay (1).

Note that agents are one of the axes of the matrices. This gives us that

Let's see if we can describe it with memetic deployment descriptors (2) and finally a state diagram (2).


Memetic Deployment Descriptors
These indicate, for each state (and collections of MIAOs), which memes may be deployed, and to which new state they lead. States are in CamelCaps, MIAOs are in ALL CAPS, and memes are in lowercase.

In other words, when in state S1 (which has no attendant MIAOs), agent P1 can deploy meme m1 to take the system to state S2, or they may deploy m2 to the same end, or agent P2 may take us to state S3 by deploying meme m1, and so on.

Note here that P1 deploying m1 does not change state -- we stay in S2 -- so the new state is not mentioned for brevity.

To make construction of our state diagram easier, we can arrange the deployment descriptors by state, rather than by agent. 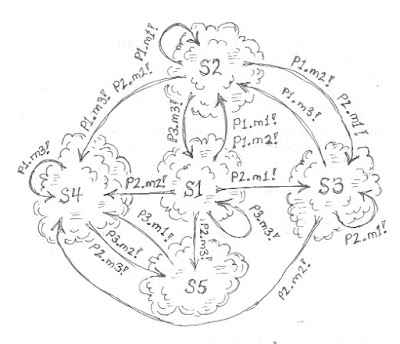 Note how this diagram may be directly constructed from the deployment descriptors and/or the transition matrix of the memeplex.

Summary and Conclusions
Depending upon whether you are designing a memeplex (or enhancements to an existing one), trying to describe an existing memeplex from sample data, or trying to discuss a real or hypothetical memeplex or interesting subset of one, a transition matrix, a collection of deployment descriptors, or a state diagram (or a combination of these) may be the best visualization tool for you.

As I've shown above, starting with any of the three, you can produce one of the others directly, and deterministically. They may also be used to check the correctness of each other, i.e., what looks like a good state diagram may prove flawed when the deployments are all written out, or when a transition matrix is laid out.

It's clear how all of these tools illustrate, and depend upon, the Second Law of Macromemetics, i.e., that the deployment of a meme results in a change of state. However, the First Law of Macromemetics, i.e., that agents try to optimize resonance (10) when deploying memes. remains elusive. These three tools allow us to represent a memeplex, but they do not gives us a deployment decision theory, i.e., how do agents decide, given the memetic environment, including other agents, which memes, if any, to deploy, how do they resolve 'jinx events,' race conditions, and so on.

Again, an elaborated theory of endomemetic, or ideomemetics (11) may be required to address these questions, or it must be demonstrated that such a theoretical scaffolding is not in fact required in order to use Macromemetic theory. More work to be done here...


A Side Note on Curbing Road Rage
One sees in the traffic situation in the USA many antisocial driving habits exemplified by failure to signal properly, driving slow in the fast lane, reckless passing, cutting off other drivers, tailgating, honking in anger, etc. An immediate macromemetic observation one can make is that drivers are in a state of memetic desolation (also known as alienation), which is to say, they have very few memes at their disposal to deploy to one another, apart from signaling (3) and honking the horn (4).

As I will probably write about later, I have an idea that making the steering wheel look like a See-and-Say (8), so you can make your care make bleating, farting, mooing, "Tah-tah-tah-tah...Charge!" "Whuh, whuh, whuh," "Boooo," and other sounds, as well as flashing the headlights and taillights (back and forth, etc.), would give drivers more ways to communicate (exchange memes) together, and thereby eliminate memetic desolation (alienation) and reduce road rage and antisocial driving behavior as a direct result, in accordance with macromemetic theory.

What we should see is that "cultures" of ways of honking these various sounds would appear, perhaps quite different for different populations (5), and combinations and sequences, perhaps like a circa 1980s fight video game, of various honks could indicate to drivers that somebody wants to get right and turn out, wants to form a group to all go fast together and who's the leader, somebody is slow in the wrong lane and please quit it, I want to pass, please go 'round, etc.

Afterword: What About The Dining Philosophers?
Is the fact that a philosopher can starve to death, surrounded by his fellows, an example of memetic desolation?

Are most of their states internal? It's mostly about the states of the chopsticks. Is it possible to represent the system as a collection of memetic transformation? And a transition matrix?

Is it possible to transform the system so that everybody is aware of somebody starving? And then to take "moral" rescue action? Could such a system then degenerate back into uncaring, if the given memes are not used? An example of memetic atrophy?

(4) and there is only one horn sound, certainly per car.

(5) one example is that in India, supposedly, since all the side mirrors are cut off to save space on the road, the horn is sounded to indicate one wishes to pass the car in front. In the US and Japan, flashing the headlights are used for this (assuming the driver in front is actually looking, which is a pretty bad bet).

(6) And according to The Second Law of Immunomemetics, any system of rules equates to a system of bullying behaviors.

(8) A child's toy, rather like a clock face, where an arrow can point anywhere around the circle, and all around it are different animals, and the toy makes the animal's sound when it points to it. "The cow says 'moo'," "The horse says 'neigh'," "The sheep says 'baaah'," etc.

(9) In fact, I'm working on a theory that a memetic system may need criminals in order to keep healthy the immunomemes that fight crime and criminality. There's probably some "designing the rebellion" in here...more later.

(10) The process of deployment involves a. 'recognition' and b. 'response.' Resonance involves both, i.e., that one's target agent recognize that one has enacted a meme, and that they then respond. Failure to recognize can constitute alienation (resulting from memetic destitution), while recognition without response can equal oppression. No response can be a resonance, as in my much-touted nudist colony example. A working definition of oppression may be where the deployer lacks a certain 'control' over the response, i.e., is unable to evince a 'reasonable' response. Passive-aggression is thus an example of an oppressive response. More on this topic later...

(11) The two appear to be the same, but aren't, really. An endomemeplex is hidden, but may be shared by a number of individuals, while an ideomemeplex is specific to a given individual. A given individual's ideomemeplex may be an 'instance' of some known endomemeplex. The contents of ideo- and endomemeplexes may, in principle, learned through memetic hacking, i.e., personal interview process. The addition of the 'need' for ideomemeplexes in order to resolve decision theory issues could make things messy either through out-of-control complexity, non-determinism (12), or other ills.

(12) The strength of Macromemetics is its basis in observable reality, i.e., memes being deployed is an observable phenomenon. If in order for it to work we must add an unobservable (13) ideomemeplex concept, it is tantamount to an admission of defeat, i.e., that humans just have a certain je-ne-sais-quoi about the way they do things, and that's that.

(13) Even if you 'observe' an ideomemeplex through an interview or other process, it's incomplete, is of questionable accuracy, and subject to continual change. If the dynamics of the whole system is too strongly tied to these unobservables, then much of the value of the science remains out of reach.
______________________________

Here's a good description of why humans like to process memes.

This essay contains diagrams that attempt to assign a weight to the probability of a given agent deploying a given meme.
Posted by jayushkin at 8:22 AM