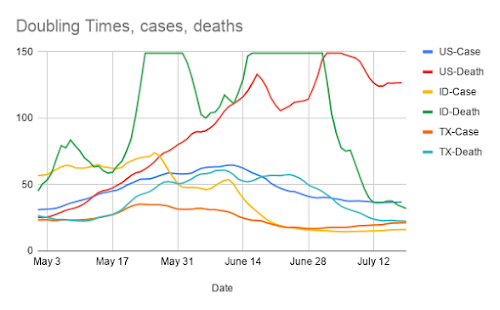 The US Deaths doubling time is still around four months, which isn't great, but who knows, it might be survivable long-term in terms of our hospitals and body disposal facilities.
The others are not so good. In the past month everything has dropped from a one-month doubling time to 2-3 weeks, including the Idaho death rate which was a low doubling time has now gotten really bad. Every 2-3 weeks we'll see twice as many dead Idahoans as two weeks ago, that sort of thing.
Of course the Idaho death numbers have been so small that could tend to jump around a bit.
Anyway, does not look good. Not the direction we want things to be trending.
Posted by jayushkin at 8:57 PM