COVID-19 Doubling times for Idaho, Texas Cases and Deaths down to 2-3 weeks 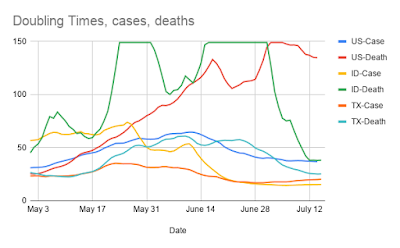 This is getting serious, y'all. The Idaho news admitted that cases are doubling every 2-3 weeks, as the above graph shows. This is true for the whole country, for Idaho, and for Texas in particular. Alarmingly, the doubling times for deaths in Idaho and Texas has dropped into that same range.

The green line (Idaho deaths doubling time, in days) has been dropping precipitously for the past couple of weeks, and now is in the range with the others (see chart).

The doubling time for deaths nationwide is still in the multiple-month range, but it is also falling.

In other words, until and unless we change what we're doing, which may involve going back to a total lockdown like back in March and April, we're going to see twice as many sick and dead Idahoans and Texans every fortnight to less than a month. Every 14-21 days, lather, rinse, repeat.