"...none cometh to salvation but through me..." 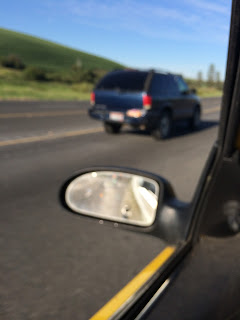 This is a loaf of bread perched right on the bumper of the car in front of me on the Moscow-Pullman Highway.  I figured it was probably a message from God.

I had this epiphany:
Message from higher power: hey, if I can pull off random shit like this, don't you think I can take care of your stupid little problems? By the way, bread (as in the loaf sitting on the bumper) is le pain in French. If you stop holding onto your pain, it will fall away like a loaf of bread on the back bumper of an SUV doing 70 on the Moscow-Pullman highway (for example). In other words,wake up and let go and let God, dumbass! What more do you want? A fleece that's wet with morning dew on one side and dry on the other?

I had other thoughts, like, that this was the universe trying to get my attention.  Maybe that in itself is a measure of how wrapped around the axels I've been lately, i.e., that if the universe has to try this hard to get my attention, then just how far out in the weeds am I?  I've always been a mystic, so these kinds of moments of direct communion are always magical.

Maybe that's it. Just trying to get my attention. The surreal imposed on top of the real to shake me out of my preöccupation.

The other message I perceived from my higher power is that maybe the answer to all of my problems and worries over the past few months is not that the couple of jerk-wad, truly evil people who've been messing up my life during this time, causing my headaches and neck pain and other sicknesses, be sentenced to death and crucified or beheaded on the steps of City Hall in front of God and everyone and me with my jumbo popcorn front row center to enjoy the show.  No, maybe the answer looks more like a loaf of bread sitting on the bumper of a car going 70 miles per hour, and that it happens to be there right at the same time as me, so that I can see it, and maybe it's special and somehow means something that I noticed, and maybe nobody else this morning did.  Maybe nobody but me.

I have these arguments with my higher power. One of the benefits of being in a state of passive-aggressive, control-freaky, paranoid, delusional, narcissistic denial is that I can lose these arguments, admit that I'm wrong, but then turn around and keep doing the same thing, i.e., fretting and worrying and stewing about things over which I have no control.

Giving up these fantasies is a way to let the loaf of bread happen.  At least I was open-minded enough to notice it, to entertain the possibility.

My higher power can do stuff. One lesson is that she can make things happen, and that they may be totally random things that seem meaningless at the time but which resolve things, and which I would never have thought of or have been able to bring about. I had to take a picture this morning (I wish it were in better focus -- the video was blurry as well) to remind me, and that's why I'm writing about it now, too.  I don't want to forget, because I think it's important, or at least something I can meditate on for a while.  Some people say "Well, if you forgot it, then it must not have been so important".  I say they're wrong. Life-changing epiphanies are what they are because they are novel, they don't happen every day, and because we don't expect them, they are hard to remember and hard to hold onto, and we have to make an effort to remember them, to write them down. If it were so clear to us what we needed to change our lives, then we would've changed them already. That's why we need to make an effort to hang onto these special moments of clarity.