A French buddy of mine had a stack of Yoko Tsuno bandes-dessinées in his childhood room when I stayed there.  Like me, he ended up marrying a Japanese woman and getting a Japanese son off her.  Maybe this was his inspiration (I don't know what mine was...yet).

I would like to get the complete collection (in French) of this series.

And it seems that Luc Besson is going to make a movie based on another famous French sci-fi comic, Valérian.  I'd like to get that series as well. 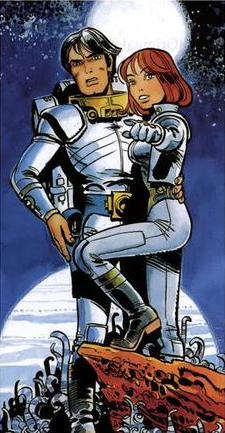 Funny how French comics (and Japanese even moreso) have a lot of well-developed, three-dimensional female heroïnes. Rather like the comics on this page, I guess. Funny, that. I wonder what it means?
Posted by jayushkin at 7:57 AM