As you can see, doubling times both deaths and cases for the US as a whole are dipping, as are cases for Idaho. US Deaths dropping from doubling every six months to more like four months. US cases, are trending towards more rapid doubling as well, from about four to more like three.

It looks like everything is starting to converge on the three to four month doubling time, but Idaho's cases are speeding back up to less than two months, or about the level they were at back in May of this year, but not yet as bad as around July (the "August Bump") when it was literally down to doubling every two weeks. By the way, a fourteen day doubling time translates into only about a  four percent growth rate. 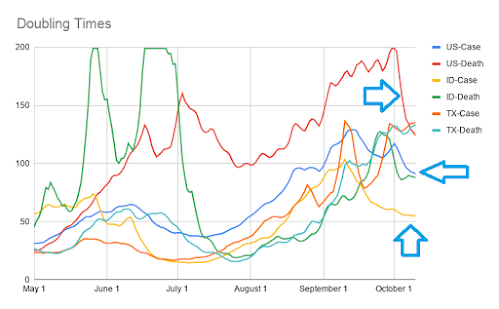