漫画 The Cost of Apathy 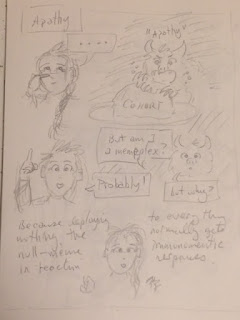 Is apathy a memetic system? Or a memetic sub-system? Memeplex? Submemeplex? Memes, or probably null-memes which are (non)deployed sap the time resource if they are not met with immunomemes against apathy.
As with activism, which encouragement is a variety, it may be counterproductive to attack apathy with "encouragement." A more effective approach would be to provide immunomemes, i.e., bullying opportunities, sanctioned by leadership (memetic nexuses), for other agents to deploy against the apathetic meme enactor/deployer, rather than just let them get the passive reward of nobody reacting to their apathy.