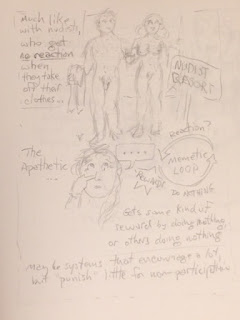 Like a nudist, who would normally expect a strong (often negative) reaction to getting naked in front of others, gets a reward in the form of nobody reacting to their nudity in a nudist resort, the apathetic gets rewarded by nobody doing anything about their apathetic behavior.
The structure of the memetic loop(s) in both reward systems is unconventional, but it is there, in theory.
Complaining, taking no action, not reacting to memes deployed by others by deploying appropriate memes, or by leadership (memetic nexus) has a classic "poisoning effect" on the memeplex by slowing propagation of memes, blocking it, etc.
It's just the same as any other "outsider" deploying out-system memes instead of memes inside the memeplex. The has a diluting/poisoning effect.
A memetic engineering technique is to "engineer the rebellion," i.e., purposefully design a set of memes which may be used by would-be "rebels," complete with reactions for the "conformists" to make, so that they're actually helping the system. This is a similar idea to "packing the meme-space," by the way.