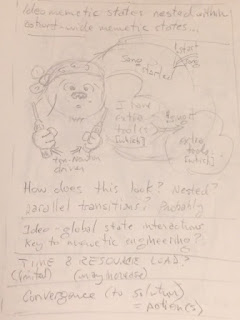 The individual knowledge, here, about which tools he has, has little chance of garnering him a memetic reward. However, if this knowledge may be somehow "packaged" into a meme which could be deployed and which leadership (the memetic nexus(es)) condone, then the agent could be motivated to sing out his knowledge and garner that reward.

Memetic nexus sponsorship, again, according to theory, means that memetic deployment of sanctioned memes will automatically garner a reward, i.e., other agents are expected to respond in kind, thus the reward and the closing of the memetic loop are guaranteed.