模倣子 Getting People to Talk Up Others

Introduction
How to get people to be nice to others, to engage in altruism that benefits the group interests or purposes? This is a problem in human behavior, which one would like to solve, i.e., how to get people to speak up and say good things about each other (when they do well), with the aim of providing behavior for everyone to model.

Analyzing the System As-Is
Here we have a system in which people write "good job" cards, actually give them to the people they want to admire (or have an intermediary do it), and then that person has to decide what to do with the card, e.g., get a free candy for it, and possibly put it into a drawing to win prizes. 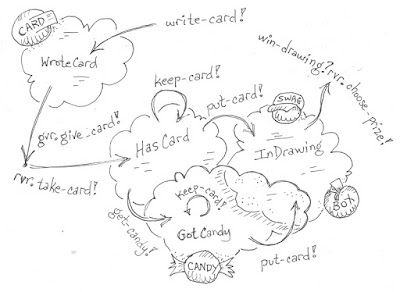 One striking thing of the chart (1) is that we want people to recommend others, but the people we want recommended are the ones deploying most of the memes in the meme chart. Also, the people writing the recommendation cards kick it off, but what motivates them? What makes them fire off the write-card! meme?

What Motivates Meme Deployment?
What we want are deployments of write-card! and also the put-card! memes. So does my memetic theory thus far really characterize how well-motivated meme deployments are? This comes down to deployment theory, which is still in development.

It's kind of cool that we can see the function of the system just by the memetic state diagram (Fig. 1). Just sayin'

Do we need to add more to the state diagram in order to accommodate motivation? This also starts to turn into a statistical / empirical problem -- how to we measure how likely people are to deploy a given meme, or the "rate" with which they are actually doing it?

One thing about this system is that there are no race conditions or jinx events. Anybody can deploy the write-card! meme any time they want, free from outside influences. So what drives this deployment? That's a problem: there's no stochastic event in the environment which could trigger this meme deployment (that we know of), so we don't know. It's a classic problem of marketing -- how do we get people motivated to do stuff?

The point is that there is no clear motivation for people to talk up others, and that's the problem we started with. This is the real problem, and it does not appear to be getting addressed (so far).

Another issue is that the person fingered for admiration is immediately thereafter required to push the process along themselves. What motivates them? They might not want candy, and they might not want everybody to be told about them. They might even want to just hang onto the card, which they're also free to do.

Summary and Conclusions
The memetic state diagram shows itself to be quite useful for analyzing a system. We can see which memetic deployments are required to move the system along, and who has to do them. Then we have the problem of who's to do it and what motivates them. There is probably more work to do in deployment theory, i.e., the probability of a deployment, or a series of deployments.

Compelled states are perhaps a useful way to look at what happens when an agent hands something to another agent, or otherwise presents them with a choice, or no choice. This seems to be something that agents try to avoid (4). There are two or three compelled states in the system here.

One thing that might be good is motivating the card givers to push good vibes through the system instead of making the recommendees do it. The rewards should perhaps be directed towards them, perhaps instead of the recommendees. This would also address the problem of what motivates card-givers in the first place.

_________________________________
(1) What's missing from this diagram? One transition not represented is that a card writer can put the card directly into the box without giving it to the recomendee (which is not allowed -- need an immunomemetic system).  The other thing is that there are two, well, technically three, "compelled states" (2). This is giving the card transaction, and also the drawing and giving somebody a prize (who says they want it?).

(2) A compelled state is something I'm working on. The idea is that it's a state that sort of "appears", kind of like with a Testimonial Trust (3), when one person takes an action. For example, when somebody is handed a card by some random other person, they have to accept the card (putting them into the HasCard state), unless they have immunomemes or such which allow them to reject accepting the card and going to some other state.

(3) A Testimonial Trust is created upon the death of the person, and does not exist until such time.

(4) People "don't like to be told what to do." Agents try to find immunomemes that they can deploy to get out of the compelled state, or avoid going into it.
Posted by jayushkin at 9:00 PM