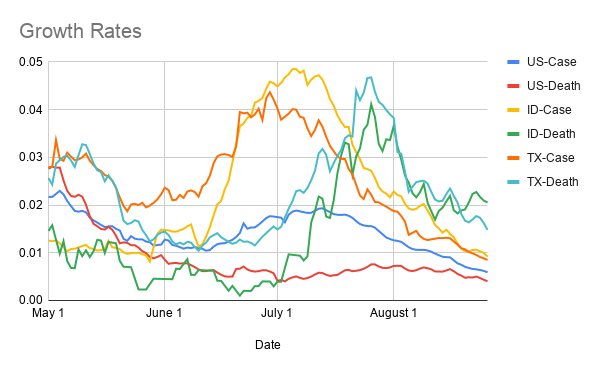 Rates are trending downward from crazy bad to just really bad. Around the start of July, cases in Idaho and Texas were pushing past 4% toward 5% (doubling time of about two weeks). As you can see, the death rate growth in both States did the same thing 2-3 weeks later. That suggests that people who were getting sick 2-3 weeks before were dying proportionally later (in smaller numbers). It's interesting that these two spikes trailed one another in two States by the same three weeks, but I'm not sure how to interpret it.
Anyway, the deaths in Idaho and Texas have dropped from doubling every two weeks to more like every month. So for a couple of weeks there we were expecting twice as many Idahoans and Texans to die every two weeks, continuously, and now it's more like every month twice as many. This is shown more clearly on another graph.
You can see how we're back to where we were, more or less, at the middle of May, and a bunch of crazy crap happened in-between.
Meanwhile, I may post some projected growth rate graphs for the USA, Idaho, and Texas, for death tolls, and number of people getting sick. It's still steadily climbing, but it seems to be dropping in and out of exponential growth.
Posted by jayushkin at 10:36 AM