A word of explanation. This graph shows the growth of deaths since the beginning of the epidemic in late March (blue line). The spikey yellow line shoes the number of deaths (one million) we would've had by April had the rate of growth continued for two weeks into the future. That curve eventually calmed down and started tracking the death curve around early May.

The growth rate in deaths was about 20% (about 25% for cases) in late March, and had that rate continued, we could've expected a million deaths a month later (orange curve). The green curve depicts the expected death count two weeks out at the rate of 20% at any point on the blue curve.

Obviously, both the green and the orange curves go straight up and "off the chart." Had the 20% growth rate not been brought down immediately by the action of US State governors (including our Idaho Governor Little), it would've been an immediate and unmitigated disaster. As it was, the curve got flattened. It's still growing far too quickly, but at the time we were literally going over the cliff as a country. 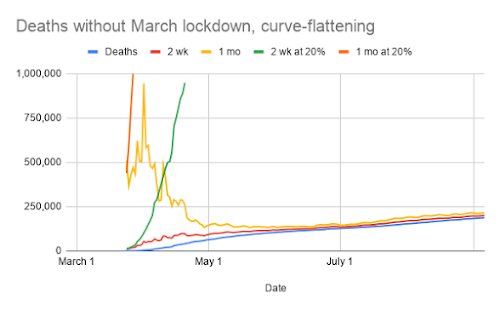 Here's the curve (again) for cases. Again, we'd've gone over the cliff and hit our two million nation-wide hospital beds in mid-March and hit double that number shortly thereafter. It would've been a horrible bulldozing-corpses-into-the-lime-pits situation (which it nearly was in New York City and elsewhere). But narrowly averted thanks to our State governors' decisive action. If they'd waited even a couple more days it would've been Lime Pit City, though, seriously. Posted by jayushkin at 4:35 PM