Hey, I'm plotting the US COVID-19 situation, and I've made a plot of all cases and deaths from the onset of the pandemic to the present, with projections for two weeks out, a month out, until November 3rd, and until the end of the year.

The two week and one month plots are meaningful in the past since they show how bad it would've been at the growth rates at that time. They show, for example, what we were facing a month later at the time the US States' governors decided to implement the lockdown. As you can see, it would've been an un mitigated disaster had they waited even a few days more.

These are just the data, so I'm not certain how to interpret them, but there may be features that match dates (such as the first lockdown). For the growth in the number of cases, we see about two and a half weeks after Memorial Day a spike in the projected number of cases, and then indeed we see the number of actual cases begin to climb at a higher rate after that. 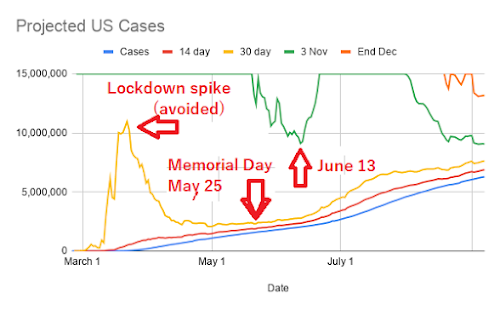 I don't know what to say about that, apart from the numbers for early August seem to have gotten really bad in terms of growth rates, and are only just settling down to where they were at the beginning of June, so something bad seems to have happened during that timeframe. You can see the bulge in the yellow curve at the start of July, and the projected numbers for Election Day make a one-eighty and head back off the chart. Make of it what you will. 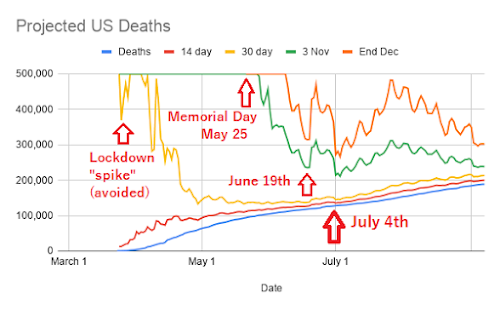 Again we see bad stuff happening with the death rates around August. Maybe the same spike in the infection rate above (June 13, 2 1/2 weeks after Memorial Day) is matched by the July 4th spike we see in the death rates.

There are good and bad trends, it seems. One bad trend is that both death and infection continue to trend upward, although not at a very strong exponential pace. Infections took a clear upward turn to more rapid growth at the start of July, but the death rate does not seem to be following that trend.

I have a number of other graphs that I'm looking at to make these comments, most of which I've posted before and probably will do again. Like I mentioned, the growth rates and doubling times for Idaho and Texas appear to have returned to their early June levels, while they were looking very bad indeed during the July-August timeframe (deaths and infections doubling every two weeks for a period).