COVID-19 Down in Texas 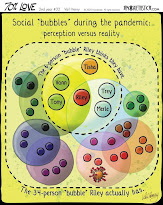 Okay, unpacking the two projection graphs for Texas. We see a "bump" in July for cases which turns into a bump in August. There seems to be some kind of "Memorial Day Backslide" in behavior of Texans and Americans in general. 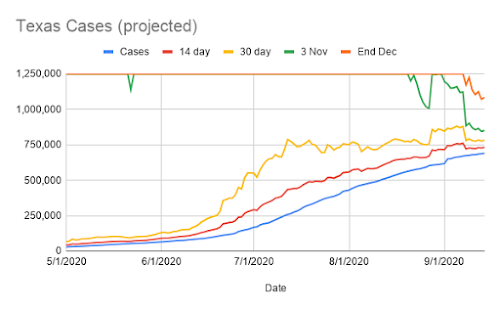 One thing we see on the projected deaths is that in June our projections (based on growth rates and numbers at the time) had deaths by Election Day around ten thousand Texans, and now it's coming in closer to twenty thousand. In other words, the situation got fundamentally worse, the November 3 projected numbers went off the chart for a while, and only just started to come back down. So it looks like whatever happened in June translated into twice as many dead Texans as we originally expected by Election Day.

One thing we notice, too, is that around mid-July we see that blue line (actual number of deaths) shifts to a steeper curve (more people sick and/or dead per day). This same change took place in the above infection chart in mid-June, again. 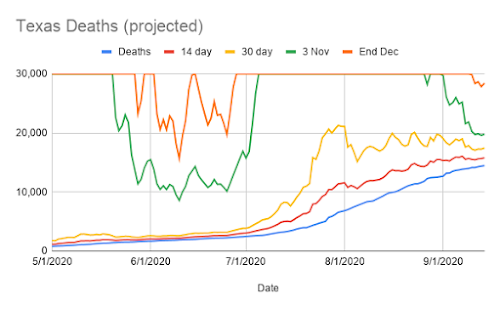 In sum, things have improved a lot. They're still pretty bad. Why? The actual infections/death curve jumped up, became steeper in June-July, and it doesn't appear to have flattened back out. Twice as many people have been dying since.
Some bad behavioral changes seem to have happened around Memorial Day, are probably still going on. The bad stuff that happened in August, whatever it was (fallout from Memorial Day?), seems to have calmed down, and instead of out-of-control projections for Election Day, we're back down to twice what we anticipated in May, not quite twice what we have now.

Posted by jayushkin at 3:27 PM