模倣子 January 6 alienation or something else

Slavoj Žižek talks about how inability to engage with the hegemonic ideology leads directly to violence. I refer to this as “memetic destitution” and it produces, rather as Žižek describes it, a state of “alienation.”

Žižek and I both hold as axiomatic the link between alienation and violence.

I personally have trouble believing that January 6 was an expression of genuine ideological disenfranchisement, however.

The outburst of violence looked like a reaction to alienation , so it’s tempting to look for a connection.

How strong of an effect can agents provocateurs or “mass political gaslighting” have towards making a people able to commit such acts of mass hysteria and violence? We know that both of these were in play leading up to January 6, but are they enough?

Or maybe it’s just political violence, which is simpler. The worker bees 🐝 tend to not know why they are doing the crazy crap 💩 they do on behalf of the higher-up power-grabbers. If there are no readily identifiable power grabbers (not true on January 6) then we go back to disenfranchisement. Spontaneity is always a great justifier and mandate for disruptive political movements—the Nazis knew it, we know it, lots of other people know it.

Ps: check out 🎥 Sophie Fiennes’ A Pervert’s Guide to Ideology, if you haven’t already. 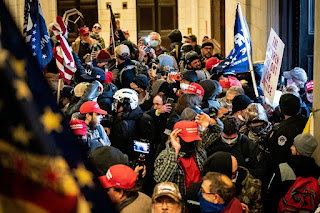