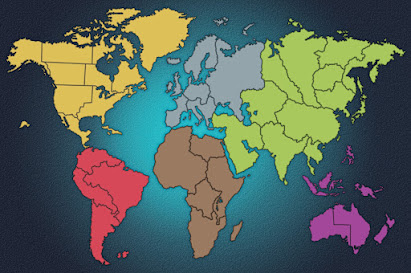 Setting up The Game
1. When the process is done, all six armies will be on the board, player armies and allied armies. The allied territories will have two armies each, but three randomly selected territories shall have and additional three armies each.
2. First, deal Risk cards to all players and all allied armies. Every army that is not assigned to a human player shall be an allied army. Each real player shall count out twenty armies to be distributed at will.
3. On each Risk card territory of an allied army, place two armies. Then choose three cards at random from the stack of cards for that army and place three more on each of these three territories. This gives each allied army 7 x 2 = 14 plus 3 x 3 = 9 for a total of 23 armies. Every real player starts with 20, then immediately gets three at the start of their turn. This makes things about even.
4. There will be at most four allied armies. This will be explained later, but players play poker for the right to use the allied armies after their own turns. As such, each allied army is assigned at least one poker suit ♥ ♦ ♠ ♣, hearts, diamonds, spades, clubs. The idea is that one must not only win a poker hand, but also have at least one card in the suit of that army in order to take control of that army.

5. Shuffle all the Risk cards together and put them into a pile. The player with the high dice roll goes first, and play proceeds clockwise.

1. When it's your turn, first tally up your armies. If you took part in a poker game since your last turn, you'll already have armies counted out and you must play with what you have on hand. This will be explained later. Regardless of poker play, if you have any factories, place two armies on each territory with a factory.

2. If you have five Risk cards in your hand, you must turn in a set of three cards. Otherwise, if you have a matching set (1) you may turn it in at this time, and place two extra armies on the territory for each card for which you control the territory on the card.

3. Place your armies. Begin your campaign. You are free to attack any territory you can, including all allies. If you are playing an allied army, however, you cannot attack your own territories.

4.2. If you conquered at least one territory, draw one Risk card and one poker card (do not draw a poker card when playing an allied army).

4.3. You may turn in sets of Risk cards at the end of your turn to buy factories and place them on any of your territories you wish.

1. Announce your intent to use which allied army. If no other players challenge you, you are free to use the army. Skip the poker playing and count out the allied armies in exactly the same way as your own army, counting out armies, using cards, etc.

2. A player is chosen to be the dealer.

2.1. All players taking a hand in the game count out their armies (including factories) to make their betting pools, or, if they already counted a pool, use those armies. If they already lost all their armies gambling, they cannot take a hand.

3. You must choose one or more cards from the pile you've accumulated (a maximum of two for Texas Hold 'Em, for instance. See below for Texas Hold 'Em rules). Set the rest of your cards aside. Other players may choose from their poker piles in the same manner.

4. The dealer deals per the rules of the game.

5. If you win the hand, you get the pot. If you have at least one card of the suit of the army you declared for in Step #1, you may use it, otherwise your turn ends and you keep the pot.

5.1. To use an allied army, play it the same as your own, started at Step #2 under How to Play above. Turn in cards, get armies for territories and factories, deploy them where you will, campaign, then get Risk cards and troop transfers. Note that only players that play an ally have the right to look at that ally's Risk cards.

6. If you lose the hand, the winner gets the pot (converted to their own army color). You may choose to keep playing, if you have any armies left in your pool. At this point you have the option to start with poker cards from your stack, or just be dealt in entirely by the dealer.

Factories vs. Immediate Armies from Cards

Cards work differently in the New Rules. There is no "perpetual growth" of values of turn-ins, for one. You can either turn in a set of cards at the start of your turn for some number of armies determined by two-die roll (2-12 armies), or at the end of your turn to get a factory on one of your territories. Factories produce two armies on the territory where they are located, forever, but they may be conquered by other players, who then get the armies. For immediate armies from a card turn-in, roll two dice.

All armies are on the board at all times. If there are only two players, then four of these armies will be allied armies, able to be used by any and all "live" players. Each allied army is assigned at least one poker suit, i.e., hearts, diamonds, clubs, spades, or ♥ ♦ ♣ ♠.

NOTE: The queen shall be the high card in the hearts and diamonds, ♥ ♦ the red suits.

The right to use an allied army is accomplished by winning a hand of poker (or being unchallenged) against the other players. At the end of every successful turn, in addition to a Risk card, a player draws a card from a poker deck.

The way a poker game works is that at the end of your turn, if you have three or more poker cards, you can declare the intent to use one of the allied armies. You must declare which army you wish to use, and if you win the hand, you must win with a card in the suit of that army in your winning hand. If you lose a hand, you may play again only if you have three more cards, which will only happen if you have six at the end of your turn.

Any player with at least three poker cards may elect to join the poker game. If he has more than three cards, he must choose three and set aside any extras.

At the end of your turn, if you have six poker cards, you have to play, and you have the option of doubling down with two hands. You have to ante for each hand, however.

To join the hand, a player must have at least three poker cards accumulated, and choose three if holding more than that number, setting the other one or two aside for the duration of the hand. Each player joining the hand of poker must compute the number of armies he would receive for territory, continent bonuses, and factories and place that in his betting pile.

Each player must ante up one army for each hand he is playing (which will almost always be one). The dealer then turns up one card (the "flop"). Betting begins with the player whose turn it is, going around giving all players the chance to check, call, raise, or fold. The dealer lays out the next face-up card (the "river") and betting resumes. A player may go all-in, but this does not result in a side pot. The best 5-card hand made from a player's hand and the two "hole cards" wins the pot. If hands are tied, the pot is split, but if the player whose turn it is wins, and his winning hand contains the suit of the allied army he selected, he gets to use that allied army. Winning players convert all armies in the pot into their own color(s).

It's up to the dealer to decide what game to play. In order for a player to join the game, they have to have at least one army to ante into the pot. For instance, the dealer may decide to play five-card draw or other five-card game. If nobody has many armies in their betting pots (have few armies or lost them all before), then a simple hand of five-card draw with one betting round might be preferable to Texas Hold 'Em.

An allied army is played just like your own army. You accumulate Risk cards and poker cards, and may play them as normal to gain armies for the allied army. Only players that win the right to play an allied army may look at that army's cards, or, of course, anything else. Allied armies collect territory and continent bonuses as well as two armies for any factory on its territory. A player using an allied army can initiate a poker hand using the cards of the allied army he controls, though of course any winnings would go to the allied army to be used by the next player getting control.

At the end of a turn, a player is able to transfer any number of armies from one territory to another over any contiguous path through territories controlled by the player. Allied armies may also make the same sort of transfer once campaigning is over. 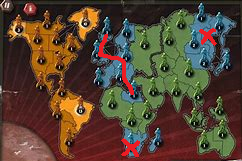 The path may be of any length, but only one of these "contiguous transfers" may be made per turn, at the end of the player's turn.

As something of a summary, at the beginning of his turn, a player receives the total count of territories divided by three plus continent bonuses, as normal, unless his troop count was determined by a previous poker game, in which case he deploys however many of those troops left in his "betting pile" after any poker losses or gains. Next, he receives two armies for every factory on any territory he controls. He can play any Risk cards in exchange for armies (by roll of two dice).

Troops from factories are placed on the territory where the factory is located.

At the end of his turn, a player may play cards to buy factories (which start to pay off the following turn).

NOTE: If a player has already counted up his betting pile for a poker game prior to his turn, he does not count up his territory and continent bonuses again upon the start of his turn. He simply places all armies (if any) left in his betting pile. He does, however, get factory armies and may turn in Risk cards for armies, regardless of previous poker participation.

If a player fails to get territory and continent bonuses on his turn, he will get them at the start of his next turn or at the next poker hand he joins, whichever comes first.

Values of Factories and Turn-in Armies

The way I'm working out whether these are equivalent is based on how long it takes to collect another set of cards to turn in. In other words, I want the average number of armies a player gets over time to be the same, regardless of building a factory or getting armies immediately.

I can either get a factory for the turn-in at the end of my turn, which starts to give me two armies per turn forever after, or I can turn in at the beginning for some number of armies immediately. I am thinking rolling for the armies, two dice, for 2-12 armies.

(1) A set of Risk cards is one-of-each or three-of-a-kind. There are infantry, cavalry, and artillery cards.